People’s Voice Party chief, Lim Tean posted a message on his Facebook page revealing that many young families he talked to at Punggol-Pasir Ris are complaining about the high cost of living in Singapore.

“I say this @ 02:55 in this video which a volunteer kindly shot for me at this morning’s People Voice community visit at Punggol Pasir Ris GRC,” he wrote.

“There are many young families in this constituency and I heard how the high cost of living worries many young families and prevents young couples from expanding their families with a second child because the cost of childcare and pre-school is simply too high.” 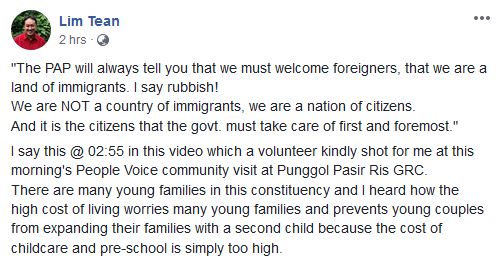 Mr Lim also added, “The PAP will always tell you that we must welcome foreigners, that we are a land of immigrants. I say rubbish! We are NOT a country of immigrants, we are a nation of citizens. And it is the citizens that the govt must take care of first and foremost.”

Mr Lim’s observation of the ground situation in Singapore is completely opposite of what PAP MPs are saying.

In Jan this year, MONEY FM 89.3 operated by Singapore Press Holding Radio conducted a radio show, which was part of REACH and the Ministry of Finance’s Pre-Budget Feedback Exercise on Budget themes such as caring for the vulnerable, young families and support for businesses.

Ang Mo Kio GRC MP Darryl David who is also a REACH Supervisory Panel Member was invited to talk in the show. MP David said that he hasn’t encountered any couple citing high cost as a deterrent to starting a family and having children, completely different from what opposition politician Mr Lim said.

However, if MP David had bothered to find out about the results of the Marriage and Parenthood (M&P) Survey commissioned by the Prime Minister’s Office (PMO), he would have known that 61% of the respondents have cited financial cost as the top reason they do not want to have any or more children:

The survey was conducted 3 years ago by the National Population and Talent Division of PMO so as to understand public attitudes and perceptions toward marriage and parenthood.

Clearly, opposition politicians like Mr Lim are more in-tune with the ground than PAP MPs like Darryl David who is furthermore, a supervisory panel member of REACH.

REACH is a government department under the Ministry of Communications and Information, involved in connecting with citizens and gathering feedback on major issues from citizens. Perhaps Mr Lim should be appointed to supervise REACH instead of MP Darryl David, what do you think?