Survey: 35% think Heng can understand ordinary Singaporeans but 21% doubt so

Current Finance Minister Heng Swee Keat has now been portrayed in media outlets since his appointment as 1st assistant Secretary-General of People’s Action Party as the most likely candidate to be the next Prime Minister of Singapore.

According to the latest Blackbox survey published in Dec 2018, 3 in 5 respondents were said to have a favorable impression of the Finance Minister while 1 in 5 thought of him negatively.

Some 22% of Singaporeans have yet to form any opinions of him.

Three in five think Heng has what it takes to be the next Prime Minister. They identify his top three personal traits for the job as: experience (47%), economic credentials (44%) and his calm demeanor (42%).

But his ability to understand the ordinary people was a controversial one with 35% believing that he has the ability to do so while 21% thought otherwise. 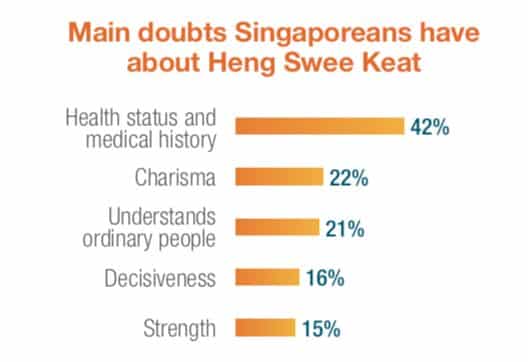 At this stage, 17% of Singaporeans have still not made up their mind whether Heng Swee Keat should be the next Prime Minister or not.

This figure is more than double (36%) for those aged between 15-24 years old. The top concern among Singaporeans about his suitability is his health status and medical history (43%).

In an opinion piece for the international news lens written in Dec last year, Flinders University Professor Michael Barr felt that it was weird that Heng was endorsed “ahead of younger, stronger and healthier candidates with better political instincts” and provided his view on the matter.

Although “no one doubts his technocratic competence, nor that he will be a safe pair of hands”, the South East Asian expert pointed out that “[Heng] has a relatively narrow range of Cabinet and professional experience and is a rather awkward public speaker”.

Prof Barr felt that this may be answered if we considered “who will be the next prime minister after Heng Swee Keat”.

Members of the public have been speculating that PM Lee’s son, Li Hongyi, might just changed his mind to enter politics later, following the footsteps of his father and grandfather, although he has publicly said he isn’t interested in politics.

“Lee Hsien Loong’s son, Li Hongyi, is currently a senior civil servant working in one of the divisions of the Prime Ministers’ Office and has been identified by his close relatives as harboring political ambitions,” said Prof Barr.

“Li Hongyi denies that he wants to follow in his father’s and grandfather’s footsteps… Rumors are now circulating that he will enter parliament at the next General Election in 2020.”

Prof Barr felt that “Lee Hsien Loong is 66 years old and indicated he would like to step down by age 70, which would make Heng Swee Keat about 61 when he becomes prime minister”.

He added that this would allow Heng the opportunity “to enjoy a decade or perhaps longer as prime minister, by which time Li Hongyi would be 45 to 50 — an acceptable age for a prime ministerial aspirant”.