And in Jan this year, she started appearing in community events together with the 4 Sembawang GRC MPs. Few days ago, her name appeared in the publicity and contact group promoting the important Merdeka Pioneer Package to residents. Furthermore, she is also the chief organizer for Sembawang’s International Women’s Day celebrations.

When the media approached her to ask if she would be running in the coming GE, she replied, “(If) given a chance to serve as MP, I will give off my best!”

Ms Poh Li San was a SAF Scholar and studied at the University of Illinois. She started her career with the RSAF as a helicopter pilot in around 1999.

According to her LinkedIn information, Ms Poh was a high flyer in the SAF. By 2003, she was already an Assistant Director in MINDEF in-charge of “reviewing organizational structure and key capabilities of SAF”. She said she reviewed the allocation of Singapore’s annual defence budget and resources as well as involved in scenario planning, threat-assessments and horizon scan of disruptive technologies. “Key outcome was to lead the transformation journey of the 3G SAF,” she wrote. 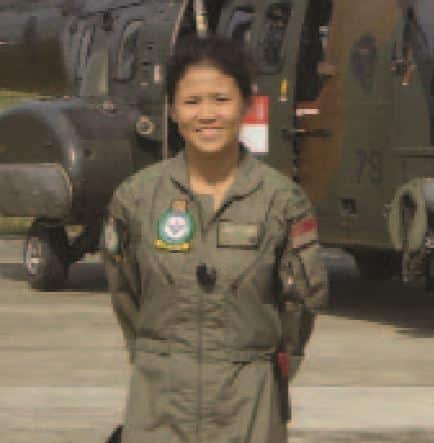 In a MINDEF publication in 2004, MINDEF featured Ms Poh, “Every individual in the Air Force holds a stake in the future of the organisation and plays a part in shaping the culture. Her greatest passions in life are adventure traveling and running marathons.”

“Her personal vision is to run an ultra-marathon in the world’s most remote but pristinely beautiful Mongolian steppes or the Tibetan highlands. Of course, some people think she is a masochist whereas others think she is just nuts…,” MINDEF added.

In 2005, she was promoted to become the Flight Commander of 125 Squadron, in-charge of search and rescue. Some of the memorable moments she said in an interview include a two-week deployment to Aceh after the devastating tsunami in December 2004, and evacuating an old woman who suffered severe intestinal bleeding on a cruise ship in the South China Sea.

In 2006, she became the Aide-de-Camp to President Nathan, planning and organising “national-level events, grassroots community functions, as well as planning and co-ordinating overseas State-level visits for the President”. She also oversaw and co-ordinated daily meetings and events for Nathan. She served Nathan for close to 4 years.

When Nathan passed away in 2016, she immediately wrote a eulogy which was posted on the PSD government website. She said she “had the privilege to serve Mr S R Nathan as the first female full-time Aide-De-Camp (ADC)”.

She said Nathan was a “very down-to-earth person”. She appeared grateful that it was Nathan who had “personally initiated the idea of appointing female military officers as his full-time ADC”, a role traditionally held by only male officers.

“To me, the greatest inspiration from Mr Nathan was his genuine care and concern for people, and his relentless effort to help raise funds for the less fortunate… Indeed, he was truly a People’s President,” she said.

“Mr Nathan was the most loving husband, supportive and caring father, and a doting grandfather. He would remember upcoming birthdays of friends and relatives, and send presents and personal notes to the birthday boy or girl.”

She said she treasured the “warmth and love” from Nathan, like that from grandparents.

“As we mourn the passing of a great leader, we also celebrate together the legacy left by Mr Nathan for our nation and our people. I feel deeply honoured to have served Mr Nathan and I am inspired to carry forward a small part of his life’s work in his service to the nation and to the people,” she wrote.

She headed the airport operations for the Budget Terminal first before going on to plan and develop T4.

She said that in planning for T4, she wanted to shake off the “ghost” of the Budget Terminal.

She noted that many people initially thought the new terminal would just be a larger version of a no-frills terminal that lacks many facilities. “But in my mind, it was quite clear it should just be like the main terminals,” said Ms Poh in an interview.

Assuming she would later be “elected” as a new PAP MP through a GRC, it’s not known if she would serve the residents full-time or continue her work in planning and developing T5 while serving as part-time MP.

Couple in their 60s paid for cancelled insurance policies for 7 years, spark questions among netizens