The ministry stated that this continues the trend of declining workplace fatalities since the Workplace Safety and Health Act was enacted in 2006, noting that the workplace fatal injury rate has reduced by more than 60% from 3.1 in 2006 to 1.2 in 2018.

“The improvements have been achieved through making companies and individuals liable for safety outcomes, rather than observing prescriptive standards, imposing stiffer penalties and extensively engaging and educating industries,” the ministry said.

While there were fewer workplace fatalities, there were 22 more major injuries and 291 more minor injuries in 2018 compared to 2017. Conversely, the number of dangerous occurrences and occupational diseases decreased by 34% and 30% respectively from 2017 to 2018. 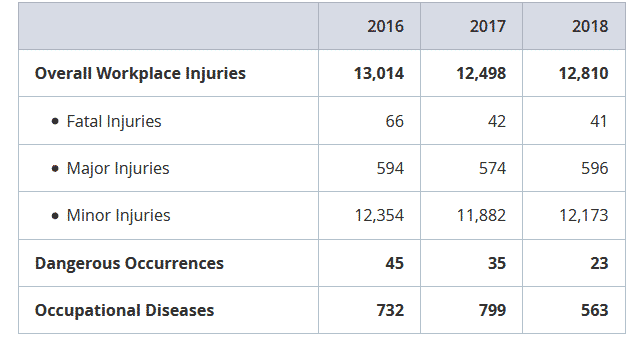 The ministry also stated that fatalities in the traditionally higher risk industries of transport & storage and manufacturing have declined.

The construction industry saw a significant halving of fatalities from 2016 to 2017, but had two more fatal injuries in 2018 than in 2017. It remained as the industry with the highest number of workplace fatalities.

More vigilance is needed in the wholesale trade and real estate industries, which previously had few fatal injuries, it noted. 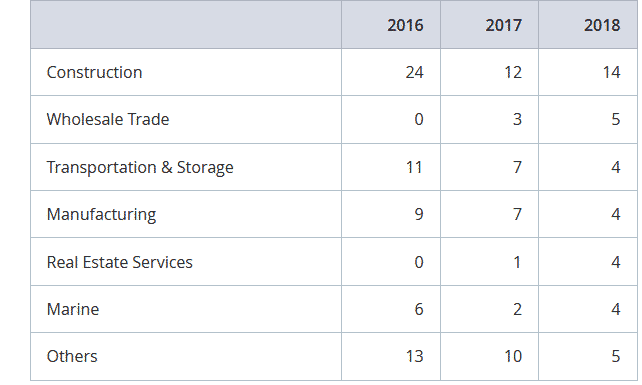 According to the ministry, vehicular-related incidents were the top cause of workplace fatalities from 2013 to 2017.

It said that the number of fatalities from vehicular-related incidents halved from 14 cases in 2017 to 7 in 2018, following sustained inspection and engagement efforts.

Falls from height overtook vehicular-related incidents as the leading cause of fatal injuries in 2018, although the number of falls from height fatalities remained at eight in 2018.

MOM then said that an area of concern was the pronounced increase in major injuries from slips, trips, and falls, which were seen across a variety of industries, including those that were traditionally of lower risk.

MOM stated that it had conducted more than 4,800 inspections in 2018, with close to 2,700 inspections carried out in the construction sector.

More than 9,000 workplace safety and health contraventions were uncovered and 69 Stop-Work Orders (SWO) issued, it noted.

Minister of State for Manpower Mr Zaqy Mohamad said, “Despite a slight dip in workplace fatalities last year, the rise in workplace injuries is a cause for concern. Some businesses may not realise the business benefits that good WSH can bring, and perceive improving WSH as costing time and money. The WSH2028 Tripartite Strategies Committee has been studying how we can align firms’ commercial interests closer to good WSH outcomes, so that more firms will be motivated to make work conditions safer and healthier. The committee’s strategies are currently being finalised and will be announced in April.”

Mr John Ng, Chairman of the WSH Council and Chairman of the WSH2028 Tripartite Strategies Committee, said, “Creating a culture of prevention and trust within a company must start from the top. Only then will developers, contractors and workers fully commit to improving WSH outcomes. The WSH2028 Tripartite Strategies Committee is exploring how we can shape our business environment so that every company will be intrinsically motivated to care for their workers’ safety and health.”

“The WSH Council will also continue to work hand-in-hand with its tripartite partners to actively engage and reach out to the employers, employees and the public sector agencies towards achieving a healthy workforce in safe workplaces,” he added.