The King of Thailand has expressed his objection to Princess Ubolratana Rajakanya Sirivadhana Barnavadi’s controversial registration as a candidate for the Prime Minister of Thailand in the upcoming Thai general election, which is scheduled to take place on the 24th next month.

The royal announcement was made on behalf of King Maha Vajiralongkorn, which was published in the Royal Gazette and was broadcasted on television on Friday (8 Jan).

Bangkok Post reported that the opposition was made on the grounds that the princess “is still a royal family member who is not allowed to take political positions” despite having legally relinquished her royal titles, following her marriage to Peter Jensen, a citizen of the United States, who she had met whilst studying at the Massachusetts Institute of Technology (MIT).

The royal announcement added: “Bringing a high-ranking member of the royal family to politics, in whatever manner, is an act in violation of the royal tradition and national culture and highly inappropriate.

“All constitutions, including the current one, have a chapter on His Majesty the King. It contains provisions endorsing the special status of the royal institution in line with the constitutional monarchy rule.

“The king is above politics and holds a position of respect. No one may violate, accuse or file charges against him in any way.

“The provisions also cover the queen, heir-apparent and royal family members close to the king,” stressed the royal statement, adding that they “may not hold any political position, as it is against the intention of the constitutions and constitutional monarchy tradition”.

Upon Princess Ubolratana’s permanent return to Thailand after her divorce in 1998, she was “bestowed the title “Tunkramom Ying” (Daughter to the Queen Regent) title”, and has since been “treated by officials as a member of the royal family”.

Following the King’s statement, Princess Ubolratana took to Instagram on Sunday to extend her gratitude to her supporters for their “love and kindness towards each other over the past day”. 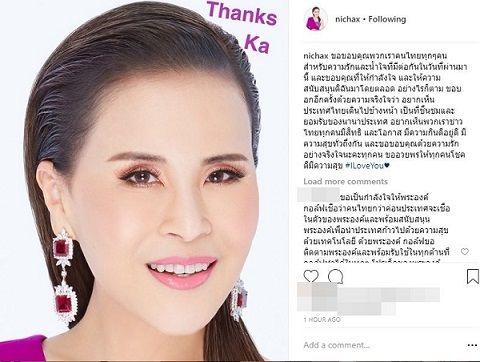 “I would like to say once again that I want to see Thailand moving forward, being admirable and acceptable by international countries, want to see all Thais have rights, a chance, good living, happiness to all,” she said, ending her post with an “#ILoveYou” hashtag.

The Thai Raksa Chart party – Princess Ubolratana’s nominating party – has said that it “graciously accepts” the royal announcement and “would abide by election regulations and royal tradition”.

Thai Raksa Chart is a pro-Thaksin Shinawatra party, and Princess Ubolratana is known to be a long-time friend of the Shinawatra family, which has an influence in the upcoming election through its proxy political parties, although they have not fielded a family member directly this time.

The Thai general election this year “had been broadly viewed as a straightforward battle between Thaksin’s populists and their allies, on the one hand, and the royalist-military establishment on the other”, according to CNA.

Prime Minister Prayuth Chan-ocha, who also announced his candidacy the same day as Princess Ubolratana did, will be running for the post as a representative for a new pro-military party established by his loyalists.

Bloomberg predicted that the recent events surrounding Princess Ubolratana’s candidacy for the Prime Minister post have brought about “the risk of heightened political tension in Southeast Asia’s second-biggest economy,” and have raised “a host of questions about the future of Thaksin and his allies, who have won every election since 2001 only to be thrown out by the courts or military”.

Emeritus professor at the University of North Carolina at Chapel Hill Kevin Hewison told Bloomberg: “We are in new territory”.

Professor Hewison, an expert in Thai politics, added: “These events are probably not over. There will be fallout.”

However, he posited, due to the “secretive” nature of the Thai royal family, “we may not hear as much as we’d want”.

Bloomberg observed that “the move by King Maha Vajiralongkorn’s sister shocked a nation where top royals are officially treated with semi-divine status and protected by strict lèse-majesté laws that shield them from criticism”.