Police officer jumps into Rochor Canal to save drunk suspect

The Ministry of Home Affairs posted a video on their Facebook page today of an police officer who jumped into the Rochor Canal save the life of an alleged molestor.

In the video, Sgt Desmond Heng recounts that he was looking around for the suspect who had allegedly molested a churchgoer. He then saw the alleged molester swim into the canal. “My first instinct was to call out to him. Show him that we are the police and we wanted to help him get out of the canal”.

Subsequently, Sgt Heng and his colleague were made aware that the man was drunk which raised concerns of possible drowning. Sgt Heng volunteered to jump into the canal to help the suspect get back on dry land. “Our main priority was to save the subject’s life”, he said. Once in the water, Sgt Heng managed to keep the man afloat and brought him to safety.

Response to the video has been largely positive with many netizens complimenting and praising the sergeant for his bravery. 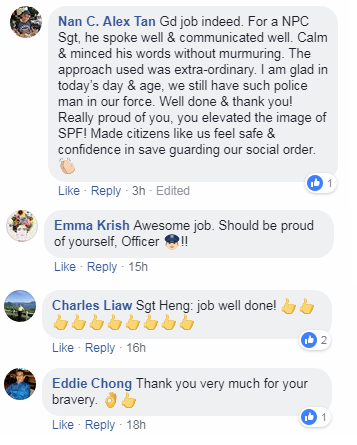 30,000 work pass holders from China yet to return, says MOM