“PAP ministers have repeatedly told Singaporeans that public land will be recycled after 99 years to construct affordable public housing. Unfortunately, they are being economical with the truth. In reality, PAP has been taking back HDB flats – even before the end of the 99-year lease – but did not subsequently construct public housing: the land was sold to private property developers,” said Mr Ang.

Mr Ang pointed to a netizen’s post talking about HDB flats in Alexandra/Tiong Bahru area being taken back by government under SERS. The land was then divided and sold to private developers. There are now 5 condominiums sitting in the land vacated by HDB dwellers: 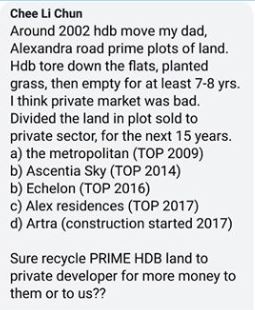 Indeed, before the condominiums, there were blocks of HDB flats sitting adjacent to the Delta Swimming Complex. But now, 5 new condominiums are built in the area:

According to information from propertyguru.com, these condos are going for:

Then, there is Margaret Ville to be built on where HDB flat Block 6C used to sit on Margaret Drive:

Now, the block had been demolished and Margaret Ville is being developed by MCL Land on the vacated plot of land:

The most famous case where the government went back on its words saying that they wouldn’t acquire the HDB flats but ended up doing so anyway, would be the HDB flats at Hillview estate:

During the GE 1988 period, then Education Minister Tony Tan accompanied Dr Seet Ai Mee, PAP candidate for Bukit Gombak, to go door-to-door to assure the residents that their flats would not be acquired. Subsequently, Dr Seet won the Bukit Gombak seat. In 1991 GE, she lost Bukit Gombak to SDP. But in 1997 GE, PAP won back. Two years later in 1999, HDB flats at Hillview were put under SERS.

Today, Hillv2 mall and condominium has replaced the HDB flats at Hillview:

“Hundreds of plots of public land meant for recycling to provide affordable housing have been sold to private developers,” noted Mr Ang.

“PAP profited billions from this while HDB flat buyers suffered when property prices shot up and are now forced to move to as far as Jurong or Punggol instead of having a home in, say, Alexandra or Tiong Bahru.”

Meanwhile, after converting HDB flats into new condos to be sold by private developers at sky-high prices, the younger generation who proceed to buy them will end up in heavy debt for the next 35 years of their working lives.