It was reported in the Malaysian media last Tue (31 Jul) that only 4 out of the 28 Russian fighter jets owned by the Royal Malaysian Air Force (RMAF) are able to take to the skies.

This is according to the new Defence Minister Mohamad Sabu, after doing a review of his ministry when he took over.

“Only four of the Sukhois are able to fly well,” he said, adding that the remaining 14 are under repair.

He said that the RMAF was unable to properly maintain the fighter jets’ airworthiness under the previous government.

His ministry had terminated the contractor engaged by the former administration and was looking at replacing them with local contractors, he told Parliament.

Not more than 25 Malaysian combat aircraft can fly

Indeed, according to FlightGlobal which provides aviation intelligence through data and analytics for over 100 years supporting the aviation industry, it’s latest publication, ‘World Air Forces 2018‘, did indicate that Malaysia only has 28 Russian-made combat aircraft. Together with 8 F/A-18Ds and 13 British made Hawks, Malaysia has 49 combat aircraft: 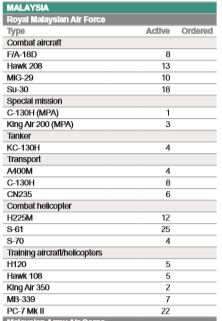 And out of the 49, 14 Sukhois and 10 MiG-29s couldn’t fly because of poor maintenance. That leaves only 25 combat aircraft able to. This, of course, assumes that all the remaining 8 F/A-18s and 13 Hawks have been carefully maintained and are able to fly. 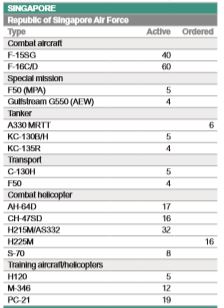 Given that Singapore’s military expenditure was the 7th highest among all countries surveyed in Asia and Oceania by the Stockholm International Peace Research Institute (SIPRI) after China, India, Japan, South Korea, Australia, and Pakistan respectively, and that Singapore’s defence budget for FY2018 is S$14.76 billion amounting to 18.5% of total Singapore government spending with respect to Malaysia’s defence budget of MYR15.9 billion (S$5.34 billion) amounting to 5.6% of Malaysia government spending, one would expect most of the 100 Singapore’s combat aircraft to be very well maintained and are able to fly.

ESM Goh on need for defence

In any case, ESM Goh Chok Tong is all for spending money on defence.

At a recent public dialogue with residents, a 70-year-old Singaporean, Abdul Aziz, shared his concerns about issues on elderly being forced to work just to survive. One of the suggestions he put forward is to cut defence so as to fund the elderly through a pension fund.

Mr Abdul Aziz said, “I am 70 years old, so I am really concerned about issues that are about the elderly. Unfortunately, I would say that the bad picture which has been painted is that the elderly have been forced to work, cleaning toilets, serving tables, just to survive.”

“May I just suggest that perhaps can we have some sort of an elderly pension fund, for the elderly. We will have an appropriate means test and all that, to make sure it is not being abused. And Mayor will ask me how do we fund this fund? Perhaps, maybe can I say we cut a bit on the defence, one F-15 maybe can pay for the whole fund. Or perhaps even the Ministers with the million-dollar salaries, can we perhaps cut by 10 per cent in order to fund this fund?” he suggested.

ESM Goh answered, “If I say cut, don’t buy a submarine, ok maybe we do that. Don’t buy your F-16, F-35, don’t buy your radar. You have done National Service, you know that defending Singapore is defending a point. You are not defending a territory of 300 square miles, 3,000 square miles, 10,000 square miles, you are defending a point. If you defend a point, you need to have advanced radar. Our neighbors don’t need it. But a plane from a neighboring country can come to Singapore within two to three minutes to drop a bomb here, if we are fighting one another. Have you got time to run to the nearest strong house, bomb shelter? Have you got time to run? By the time the siren comes up, before you can run, the plane is already here. We need an advanced warning system. That costs money.”

“Well in the end you say why, we are so small anyway, we can’t defend ourselves, why defend, just spend the money on all these. If you can’t defend yourselves, are you going to get the investors over here? I put money over here, there is no guarantee about my investments, I won’t put money here. Are you going to get the economic growth? You are going to have unemployment. You won’t get growth. Where do you get your money from to pay old folks like you and me? Think about that. So there is a whole system.”

So, in other words, ESM Goh is of the view that by spending more on defence, more investors will come to invest in Singapore to create jobs for Singaporeans because they will feel safer.

Recent Vandalism Cases – A Cause for Concern?