Graphical photos of a cat killed at Bukit Batok West Avenue 7 went viral as its owner, Adlin, posted them on her Twitter account, claiming that the cat was murdered.
On her post, she wrote that her family suspected the cat, which is ten months old, sneaked out of their house and was smashed on its head and thrown away down the stairs by one of their neighbours.
“There’s a trauma at the right side of his head where most of the blood is coming from,” she wrote. 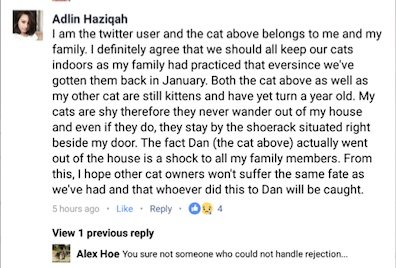 Ms Adlin stated that her cats have never gone out of their apartment nearby before, adding, “The furthest they went is always at our shoe rack.”
In her tweets, she wrote that reports have been filed reported with the police and Agri-Food and Veterinary Authority (AVA).
https://twitter.com/hzzzy_/status/866163397808672769
The body of the cat, named Dan, has been handed over to AVA for postmortem investigation. Meanwhile, the Police has been checking the CCTV record in the area.
According to media reports, AVA has stated on Monday (22 May) that while investigations are ongoing, the public should “refrain from speculation as not all animals deaths are related to cruelty.”
Ms Adlin stated that her family has ruled out poisoning and falling as the cause of the death, writing, “We’ve ruled out poisoning and falling from my house window as I live on the 10th storey and he would’ve died an instant death outside the void deck instead of the staircase landing where me and my mom found him.”