Three days ago, a report about 70 percent of School Of The Arts (SOTA) graduates pursuing non-arts related university courses raised several questions from netizens about the role of the arts in Singapore, as well as that of the school.
According to the Straits Times report, the percentage of graduates pursuing non-arts related university courses has increased from 60 per cent in 2012 to 83 per cent in 2015.
Minister for Culture, Community and Youth, Grace Fu, had said in an award ceremony addressed to SOTA graduates that a sizeable percentage of graduates had chosen to pursue non-arts related university courses after their graduation.
A few days later, a current SOTA student had put up an art installation near the Vice-Princiapal’s office, with names of teachers who have left the school onto paper airplanes.
The installation, done in memory of the teachers who have left the school, was removed by the school the next day. The student will also be spoken to by the school as she had not sought approval from “relevant authorities” before installing her work on the school’s premises.
A former teacher, Mark Rozells, from SOTA had posted the installation on his Facebook page, saying the following:

One comment from Dorcas Tirhas replying to a netizen saying that there are so many airplanes, explained that the teachers whose names were on the paper airplanes were teachers who taught the student over her time in SOTA. “It is an expression of her loss and a respectful and meaningful tribute to them. Having said that, many of them have left in the last couple of years,” Tirhas said. 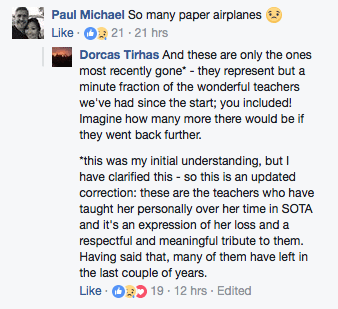 Other comments on Rozells’s thread include people appreciating the work of art and the gesture. Some also questioned the retention rate of teachers from the school.
A comment from David Gan also shed light on the context of the installation. Gan said,
“dear all, i just wanted to share that the student in question did the work during a performance art masterclass. it was a personal expression of loss and as a form of catharsis, and there was no intent to offend. the work was removed on the grounds that the student had not sought approval from the relevant authorities to install a work on school premises, and the student will be spoken to tomorrow. i would just like to say, on behalf of the student, that your words mean a lot to her. best.”

Rozells’s post, with 513 shares, had other former SOTA teachers commending SOTA’s students and multiple comments saying that the gesture will be remembered, and some others appreciating the simplistic yet impactful message.