NSL and BPLRT experienced train disruptions at the same time

In a twitter announcement, Singapore Mass Rapid Transit (SMRT) made known that it is experiencing a train service disruption on the North-South Line (NSL) due to a signalling fault and asked commuters to add another 15 minutes of travelling time from Bishan to Sembawang towards Jurong East, noting that the train service is still available. The incident happened last night, Tuesday (28 March), at around 8.45pm.
The incident occurred hours before SMRT went on trial for the new signalling system, scheduled to happen at 11pm last night. During the last hour of passenger service, the train came to a halt for about 10 minutes.

An hour after SMRT’s tweet, another tweet was posted saying that 15 minutes of additional travelling time was still needed. SMRT also noted that it was working to recover service.

Around two hours after its first tweet, SMRT said that the fault had been cleared and trains were progressively returning to normal speed, adding that 10 minutes additional travelling time was still needed.

A moment later, at around 10.22 pm, SMRT stated that train services has resumed.

However, many people took their complaints to social media.
Chloe wrote on her Twitter account that although SMRT gave away free tickets, their service disruption was not pardonable. Stanley wrote that the train moved only a few meters and then hit the brakes.
Lee Cheryl complained that she boarded from Bishan at 9.40 and arrived at Sembawang at 10.20, taking her 40 minutes of travelling time. 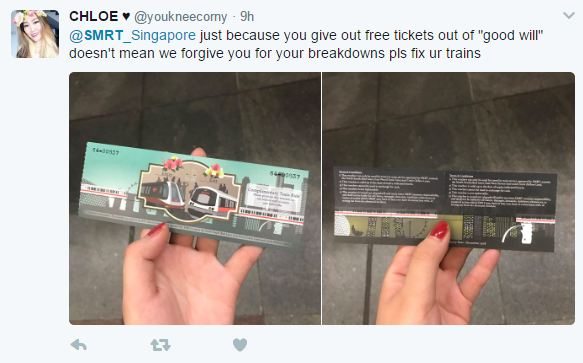 At the same time last night, BPLRT also experienced service disruption due to a track fault. 65 commuters had to be evacuated.
SMRT tweeted at around 8.10 pm saying that there was no train service between BP1 (Choa Chu Kang) and BP6 (Bukit Panjang). It noted that community loop service and free bridging bus service is available.

The service resumed at around 9.30 pm.

SMRT said that the disruption was caused by a propulsion fault. Another LRT train was deployed to rescue the affected train to the depot for further checks.
A Facebook user, Myo Khine, posted pictures of the incident on her Facebook account.
She wrote that the train stopped at just opposite of block 103 Teck Whye Lane, in between Phoenix and Teck Whye LRT stations, heading to Bukit Panjang Plaza direction.

Jack Beanstalk wrote on his Twitter account that there was a total chaos at BPLRT as the staffs were unhelpful.
“Disgusting this standard can operate public transport,” he wrote.