The pioneer busker Roy Payamal was arrested on Saturday (11 Mar) in front of Takashimaya by police officers from the Singapore Police Force and was released on Sunday morning, the following day, on bail.
A passerby, Eric Fong, witnessed the arrest and posted the incident on Facebook at 10.22pm Saturday night. He also posted photographs of police officers handcuffing Payamal.
His post has so far received more than 1700 shares and 532 comments.

According to Mr Fong’s post, the street performer was arrested by two police officers in front of a large crowd of people at Takashimaya even though he had a license to perform at Orchard Road.

Mr Fong wrote, “Police abused his authority to even challenged to handcuff me as well when I spoke up in front of the crowd. Public witnessed the whole incident at 9.50 pm on 11/3/17 in front of Taka.”
Payamal is known for his busking work for over 30 years, he had starred in Ng Xi Jie’s 2015 debut feature film titled Singapore Minstrel, which premiered at the Singapore International Film Festival (SGIFF) that year.
Artist and filmmaker Ng Xi Jie also wrote of the incident on her Facebook, under the name of Salty Thunder. She wrote that she has spoken to the witness Eric Fong, ‘a Singaporean who stood up for his fellow man’.

She said according to Mr Fong, the police came to check Roy’s license. She further mentions that the police have been checking his license every night because a nuisance maker calls on them every night to check – and they just see the license and go off typically, one of them even joked that don’t know why people keep complaining, nothing is wrong.
Ms Ng commented, “I am wondering why they can’t investigate the person who is calling every night, and wasting police energy to check on a licensed busker.”
“This policeman spoke in mandarin to Roy whose mandarin isn’t very good,” Ms Ng wrote, “At some point Roy said he was going to keep quiet and sat down. Maybe he had raised his voice a little before that. The police then handcuffed him in front of everyone.”
Kevin Shamus O’Hara posted Payamal’s announcement of his well being on Fong’s Facebook: 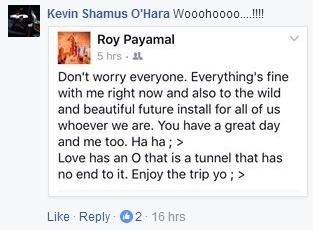 On 11 March at 4:13pm, Ms Ng wrote on her Facebook: “Thank you everyone for the support. Much love. Roy Payamal was treated very nicely, released on bail, has all his equipment, had his supper, and is going busking Sunday night outside Taka with his license.”
The police confirmed that the 54-year-old ‘Silver Man’ was arrested on Saturday for disorderly behavior and said investigations are ongoing.
Questions by netizen on the police’s due process
In response to reports on the arrest of the busker, netizens queried why there was a need to arrest and handcuff the busker when he had a license in the first place.
Andy Yeo wrote, “Then why handcuff him without any valid reason? If he is too loud, the officers can ask him to lower down his voice and not handcuff him! It is a humiliation on any individual to be treated this manner!”
Au Kah Kay wrote, “Police have nothing better to do than to handcuff and arrest a harmless busker. When it comes to physical assault, police will tell you that it is a non seizable offense and to make a magistrate’s complaint. Where do their priorities lie? Aren’t police supposed to protect citizens rather than harass them?”
Toh Yiu Kwong wrote, “Sounds rather heavy handed of the police man to assert his authority. It would be good to know why the busker is considered a public nuisance if he has a busker’s license. Perhaps the Police can give a good explanation on this.
It seems from the report that the police man issued a threat of arrest to Mr Fong for obstructing the arrest.
I hope the authorities can explain if talking back to a police man is considered a crime and can be construed to be obstruction of justice.
I certainly hope that this is a case of a police officer overstepping his jurisdiction and is not symptomatic of the authorities turning Singapore into a police state where the police is ruled supreme over us.”