The Land Transport Authority (LTA) has announced that its quarterly review of traffic conditions on roads and expressways had been completed and it will be revising the ERP rates at the following locations: 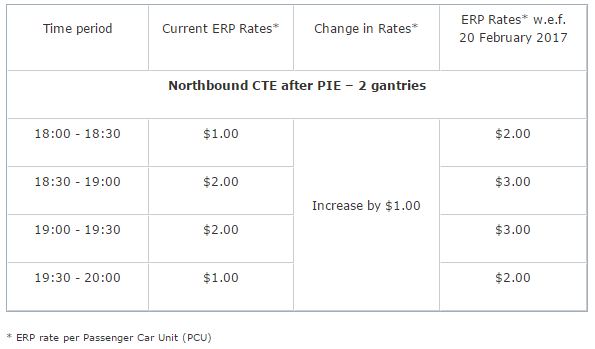 LTA stated that traffic conditions along the eastbound PIE during the evening peak hours have deteriorated in recent years.
It noted that in particular, eastbound PIE near Adam Road and Mount Pleasant have experienced heavy congestion, with traffic speeds significantly below the optimal range of 45km/h-65km/h, going in fact below 40km/h.
To manage this congestion, LTA said that it will activate the ERP gantry situated along PIE (Changi) after Adam Road and the gantry at the Mount Pleasant slip road into PIE (Changi) during evening peak hours, noting that that the gantries will start operation from 20 February 2017.

The rates are shown below. 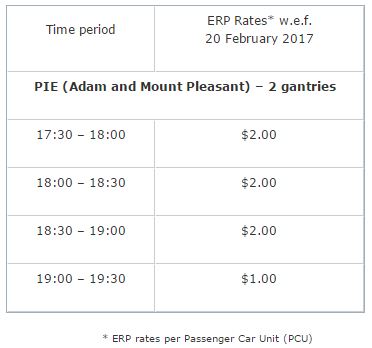 As announced in September 2016, LTA stated that it has been reviewing the need for ERP to manage traffic congestion along the stretch of the south-bound Kallang-Paya Lebar Expressway (KPE) between Tampines Expressway and Airport Road during the morning peak hours on weekdays.
“The latest quarterly review shows that traffic speeds along this stretch have consistently remained below the optimal speed range of 45km/h to 65km/h, dipping to as low as 30 km/h,” it said.
To manage this congestion, the Authority stated that works have already commenced to prepare for the activation of the ERP gantry situated at the Tampines slip road into KPE (ECP), just before the KPE tunnel entrance. LTA will continue to monitor the traffic speeds along KPE in the next quarter, before finalising the ERP operating hours and rates.
“The second quarterly ERP rate review for 2017 will take place in May,” it noted.