By Margaret Yang, CMC Markets
US indices had broken the records yesterday night, setting new highs with the financial and energy sectors gaining the most. The rally was largely driven by earnings optimism and President Trump’s “phenomenal” plans around tax reforms. He said that he would announce the most ambitious tax reform plan since the Reagan era in the next few weeks.
It all came too fast. Although the market is still lacking details and credentials surrounding this tax reform, bullish sentiments have already spread over to all risky assets. If massive tax cuts are implemented, it would inflate the asset value, stimulate consumer spending and significantly boost corporate earnings of the world’s largest companies. Markets are trying to price-in all these factors above.
The US dollar rebounded over half a percentage overnight, sending euro and yen to their lowest levels this week. USD/JPY extended its gain to 113.7 this morning.  112.3 proved to be an immediate support level and its next resistance level is around 115.5 area.
Against the backdrop of stronger US dollar, gold prices retraced overnight after hitting the key resistance level of $1,240 (50% Fibonacci level). Silver and platinum prices also suffered from similar losses.
Trump also broke the ice with China by sending a letter to president Xi Jing Ping, stating that he is looking forward to working with him to develop a constructive relationship that benefit both countries. This is Trump’s first diplomatic approach in dealing with China since he took office.
China responded positively, saying that it hopes to develop a healthy and sustained China – US relationship.
This superficial gesture of peace could hardly cover the fact that China contributed over 40% of US’s trade deficit, which climbed to $ 502 billion in 2016. This is the highest level since 2012 and that should allow Trump to adopt a tougher approach against free trade. We have reasons to believe that trade conflicts with China are probably inevitable, but unlikely to escalate to a total trade war in the near future.
One possible optimum outcome to avoid major conflicts is to find a win-win solution to allow US to export more services- such as tourism, financial advice and intellectual property rights – to China. China is currently undergoing transformational shifts towards a more service-centric and consumer-driven economy.
US Dollar Index Mar 2017 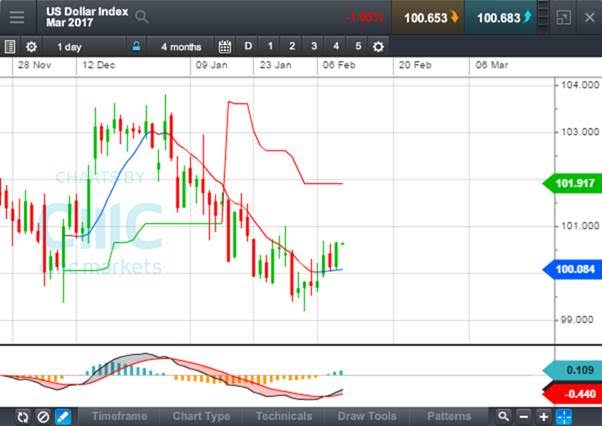