Oil rebounds despite inventory pile up

By Margaret Yang, CMC Markets
Oil prices rebounded 1.5% overnight despite a big jump in US crude inventories. Last night’s US DoE report showed that commercial crude inventories rose 13.8 million barrels last week as US refineries cut output. This marks the fifth consecutive week of climbs and also the largest weekly jump in over two years.
It seems that traders were not terrified by this figure as preliminary data from the API showed an even bigger increase earlier this week.
Gasoline prices also got a boost due to a surprise decline in inventories. The US dollar index dropped a quarter of a percent last night, which could be another reason oil prices were supported.
The recent Baker Hughes rig count shows that US oil drillers increased by 17 to 583 last week, as higher oil prices attract shale explorers back to the market. It worries investors that an increase in output from the US will likely offset OPEC’s production cut and thus send oil prices lower.
Technically, the Fibonacci retracement suggests the immediate support and resistance levels for WTI cash contract to be around $51.72 (50%) and $54.75 (61.8%) respectively. It has been forming an ascending triangle pattern over the last two months, which suggest more upside if it can break above the $53.5 level.
Crude Oil West Texas – Cash 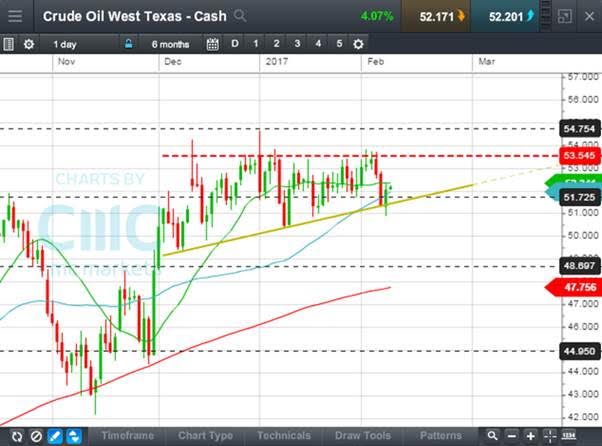