A wake-up call for the markets

By Margaret Yang, CMC Markets
US equity markets lost around 0.6% last night following President Trump’s travel ban on seven predominantly Muslim countries – a step to materialise his immigration policy as promised in his election campaign.  This action quickly received strong dissent from social groups and gave rise to protests in the airports.
What worried the market was that this could be just the beginning, and that served as a “wake-up call” to all investors after the long weekend. Trump’s immigration fire may soon spread to other working visas.
According to Bloomberg news, Trump’s administration has drafted an executive order aimed at overhauling the work-visa programmes that Silicon Valley giants such as Microsoft, Apple and Amazon depend on to hire thousands of foreign talents each year. Businesses would have to hire American first and if they intend to hire foreigners, priority would have to be given to the most highly paid foreigners, which will considerably increase company’s operation costs.
This policy, if implemented, would have a far-reaching impact on the long-term development of the US’s role in the fields of science and technology. It is also arguable that the incentive of creating more jobs for Americans would probably end up having the opposite effect – a backward move for Silicon Valley would scrap thousands of jobs.
In Singapore, SIA Engineering, Hutchison Port, GLP and Starhub will announce their earnings this week.
The STI rallied over 6.4% in January, marking the best performing market in Asia. This rally has partially priced in favourable 4Q corporate earnings and higher crude oil prices this year. However, the sustainability of this bullish sentiment will be tested in February, in which two thirds of the blue chip companies’ earnings will be announced.
US NDAQ 100 – Cash 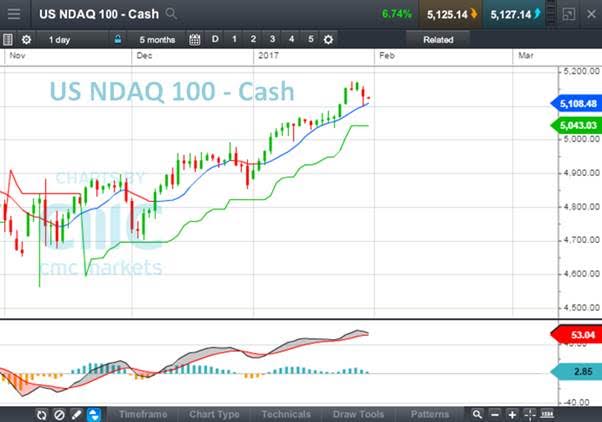