By Margaret Yang, CMC Markets
The Dow Jones Index held above the key psychological level of 20,000 points last night, supported by on-going positive earnings surprises especially from financial and information technology sector. Caterpillar, Microsoft and Intel all posted quarterly earnings that are higher than Street’s forecast.
However, escalating political tensions between US and Mexico accompanied by rising uncertainties may soon dampen market sentiment. Last night, “Tweeter King” Donald Trump claimed that NAFTA has been a “one-sided deal from the beginning“, and have therefore threaten to impose a 20% import tax and he upcoming meeting with Mexican president has been cancelled.
S&P 500 and Nasdaq index both closed marginally lower.
Apparently, Trump is not very happy with the 60 billion dollar trade with Mexico every year. But what worries me is that Mexico accounts for only around 8% of American’s trade deficits. Whereas US’s trade deficit with the Pacific Rim is approximately six times larger than that of Mexico. His hard stance towards Mexico could give us a hint of his future trade policies against the Pacific Rim countries, especially China.
Singapore stocks’ performance diverged over the past few days, with banks extending gains but offshore & marine have started to consolidate. Keppel Corp’s full year earnings came out to be $784 million, down 49% y-o-y due to poor performances in the Offshore & Marine sector. 4Q earning per share (EPS) of 7.9 cents was also below market’s expectation.
Keppel Corp 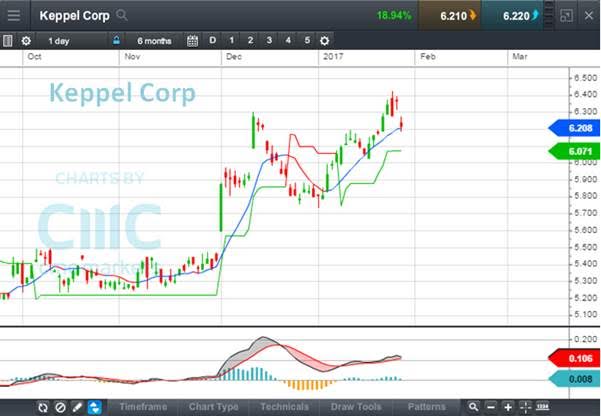