By Margaret Yang, CMC Markets
US equities rallied last night, spurred by better-than-expected corporate earnings on Tuesday and animal spirit backed up by Trump’s new policies to support American industrial and manufacturing sectors. Materials (+2.5%), financials (1.2%), information technology (+1.0) and industrials (1.0%) were among the best performing sectors yesterday.
So far, more than two thirds of the S&P 500 companies have announced earnings that beat the consensus forecast. If this continues until the end of earnings season, it would mark the second quarter of EPS improvement for the US equities.
US president Trump scrapped another of Obama’s policies aimed to address climate change by allowing two oil pipeline projects in Keystone XL and Dakota to proceed. These two projects were blocked by environmentalists and the previous government due to pollution and greenhouse gas concerns.
This move, if successful, is estimated to create 28,000 blue-collar jobs and increase the US’s domestic steel consumption. The multi-billion pipeline project is designed to carry crude from oil sands in Canada to refineries in the US.
Trump has also met with automobile giants namely General Motor, Ford and Fiat Chrysler last night, promising to soften environmental regulations. The share price of American’s largest carmakers soared last night.
So far, what Trump has done since his inauguration is generally consistent with his promises during the election campaign. The simple and easy to remember slogan “buy American and hire American” will be his key pursuit in the foreseeable future. The good news for the US stock market is that a new wave of the “Trump rally” has probably just started.
US SPX 500 – Cash 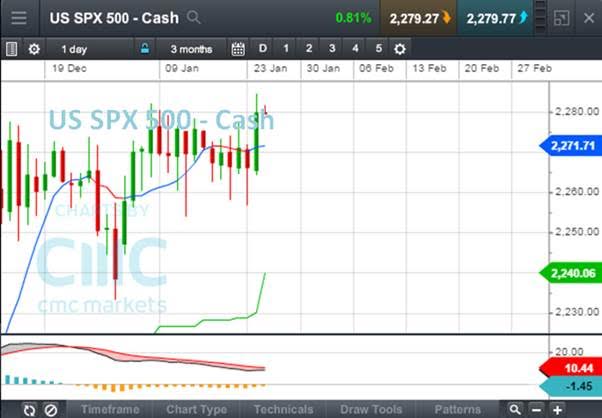