US president- elect Donald Trump held his first press conference last night. He acknowledges Moscow hacked the election; He also made it clear that he would isolate himself from his own business to avoid potential conflict of interests, although still maintain ownership.
But it is what he didn’t mention – fiscal stimulus – that worries market participants. The US dollar rally was based on the assumption that Trump’s administration will push through a massive infrastructure building and fiscal stimulus package, which will lead to higher inflation in the future. Rising inflation and treasury yields will then force the Federal Reserve to consider a faster pace of rate hikes to counterbalance that effect.
The slump in the US dollar index last night indicated that assumption is now unwinding because the president- elect never even mentioned that key word “stimulus”, which the market has been widely anticipating.
Uncertainty is rising, along with gold prices. Gold is challenging a key resistance level at $1,193 this morning and there is a reason for it to go higher if this uncertainty continues to rise.
Gold – Cash 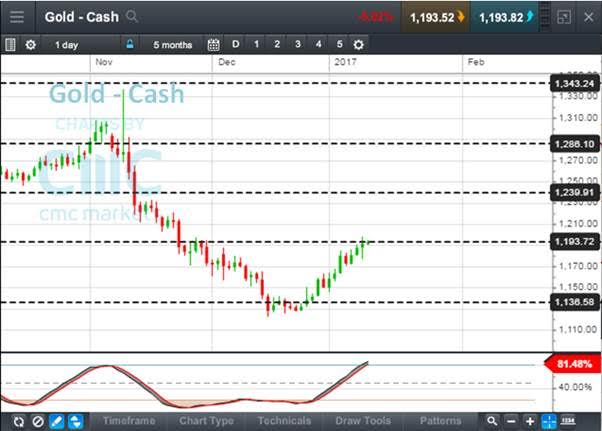