Certis CISCO Security Pte Ltd confirms with local media that it hopes to hire 120 university graduates as its auxiliary officers from Taiwan, aged 20 to 40, on two-year contracts.

Yesterday, The Online Citizen reported that the company is seeking to employ potential auxiliary police officers (APOs) from Taiwan as an effort to booster the numbers of officers to support the understaffed Singapore Police Force.

Apart from the online advertisement that the employment agency engaged by Certis CISCO published on various websites. It has also been reported by Taiwanese media that there has been recruitment campaigns at various universities during December.

Local media reported that the company did not explain why it was recruiting specifically from Taiwan, but a spokesperson from the company said that this unprecedented move would beef up its resources and ease the labour crunch.

She said: “The manpower shortage is a perennial situation in Singapore, and we have been working with the authorities to recruit from suitable alternate sources.”

Straits Times reported that the the spokesperson noted that the company would have to seek permission from the authorities before deploying the recruited APOs, and declined to comment further about specific roles or areas of deployment.

The company notes that it has no plans to hold overseas recruitment drives in other locations outside of Malaysia and Taiwan. 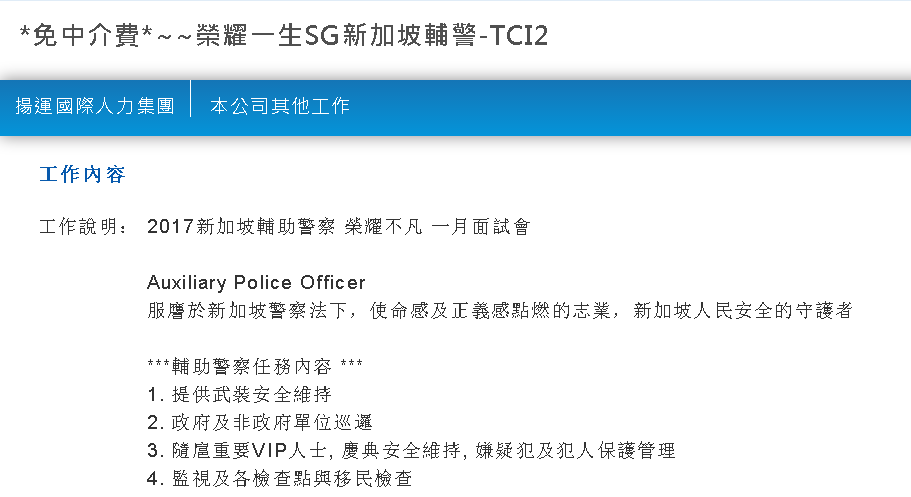 However, the published advertisement clearly states that the applicant would be expected to perform the following duties:

The advertisement also promises a monthly salary of S$2675 with a entry bonus of S$4000 ($2000 upon entry and $2000 upon completion of two-years term). Based on the statistics released by Taiwan’s Ministry of Labour in 2015, the average starting wage of an university graduate is S$1200.

The work will be based on 12 hour shifts with overtime salary. Air-conditioned dormitories would be provided, one would only need to pay for utility bills and meals. Applicants will be issued with either Work Permit, S pass or Employment Pass and assistance will be given to apply for Permanent Residence if performance is exemplary.

The auxiliary officers will also enjoy various annual bonus, performance bonus, medical insurance and welfare. There will also be a return ticket provided at the end of the two-year term.

According to UpMedia, Singapore’s first attempt to source auxiliary police officers in Taiwan is likely due to the recent change in its conscription law which only requires the males to serve a four-month period of military service as compared to the previous one year. This change would likely result in an increase of male graduates into the employment market.

Despite the attractive pay for a low ranking corporal, it is still to be seen if there would be a surge of applicants to take up the job which would require one to live away from one’s home country for an extend period of time. Earlier attempts by Certis Cisco to attract Malaysian graduates since 2007 have not resulted in much success either.

Certis Cisco, a fully owned subsidiary of Temasek Holdings, has a monopoly to supply manpower support to various departments of the Ministry of Home Affairs, ranging from immigration, traffic control duties, law enforcement at hot spots, such as Little India and Geylang. Just recently in 2014, Parliament passed a bill to allow the auxiliary officers to look after inmates at the prison.

During the commission of inquiry for the 2013 Little India Riot,  former Police Commissioner, Ng Joo Hee revealed that the size of the SPF has not kept pace with the population increase, said the force would need a further 1,000 more officers if it is to beef up its anti-riot capabilities, and to continue to keep Singapore safe.

Since the Little India Riot, it has been revealed that Singapore has very low police officer to population ratio of 170 officers per 100,000 population. Members of Parliament such as Ms Sylvia Lim, have raised concern over the lack of police force in Singapore and the over-dependence on auxiliary officers who are out-sourced.

Ms Lim said in her 2016 speech at Parliament, “Outsourcing clearly has its limits. Should the focus instead be on Home Team manpower recruitment and retention, and ensuring they have the best resources on hand to protect our Home?”

Certis CISCO said the first batch of Taiwanese APOs will be ready to be deployed after April 2017.

The company traditionally hires Singaporeans, Permanent Residents and Malaysians, and has more than 3,500 APOs, more than half of which are locals which is regulated by the Ministry of Home Affairs.

Minister of Home Affairs and Law, K Shanmugam spoke on the nationality ratio in 2016, “My Ministry has deliberately required that there be a Singaporean majority in the APOs, despite the manpower challenges. If there is any change to that, it will only be done after a careful review.”

TOC has written to the Ministry of Home Affairs for comment and will include the response when they reply.