It also stated that affected broadband customers who are also Singtel postpaid mobile customers will have their local mobile data charges waived for both Saturday (3 December 2016) and Sunday (4 December 2016).

At the same time, it also offers all affected customers a 10% discount on this month’s broadband subscription, which will be reflected in January bill. 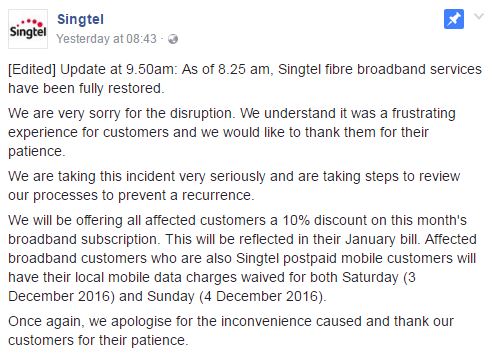 The service disruption was announced on its Facebook page on Saturday morning. It announced that some of their customers may be experiencing difficulties accessing their Fibre Broadband services and their engineers are working to resolve the problem.

At 7.50pm, SingTel said that its engineers have been working since morning to resolve its fibre broadband issues which have regrettably, caused islandwide disruption, which has affected residential customers and some business customers.

“We are currently still investigating why our servers cannot assign IP addresses to our customers’ modems to enable broadband connectivity. So far, while we have ascertained that the service disruption is not due to a DDoS attack, we are not ruling out other plausible causes,” it said.

SingTel also said that it would be working with its vendors throughout the evening and overnight to isolate the problem and get the broadband services up and running again.

SingTel then noted that its TV, mobile and fixed line services are not affected. Fans can still catch their Premier League and other football matches on SingTel TV tonight.

Despite the fact that the company had already announced that service has resumed this morning, there are customers who are still not able to access their services by the time this article is written.

According to the statistic recorded online, it shows that there are still some breakdown reports lodged.

Customers went to its Facebook page, complaining about the on-going issue. Consumers such as Ummirita Binte Abdullah who wrote on SingTel’s Facebook post, said that not only her broadband service is still down, her TV and and home line are also unaccessible.

Some commenters on the Facebook page advised such users to reboot their router and optical modem so as to reconnect to the network. However, even after they reboot the modem, some still could not connect back.

Here are some of the comments by the customers: