President Tony Tan Keng Yam has arrived at Japan for a nine-day State visit to commemorate 50 years of diplomatic relations between both countries.

President Tony wrote on his Facebook page yesterday that the Singapore and Japan enjoy a close and enduring friendship from bilateral trade and investment to cultural and people-to-people exchanges.

He also said that people of both countries are constantly forging greater understanding and stronger ties with each other. Singaporeans are especially fond of Japanese popular culture – be it cuisine, J-pop music or anime.

“As I leave for my State Visit, I am confident that Singapore and Japan will continue to strengthen this relationship even further for many years to come,” he wrote. 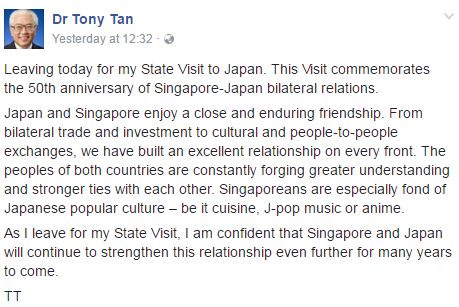 On his first day in Japan, President Tony visited Miraikan by Japan’s Science and Technology Agency.

The place, also known as the Future Museum is 40,000 square-metre in size with many attractions, which includes Asimo, automaker Honda’s most advanced two-legged robot, as well as the Geo-Cosmos, a globe that projects how Earth looks like in space in almost real-time data.

He also visited one of the labs by the Superhuman Sports Society where the Museum uses technology to develop new sports such as wheelchair dancing, which can allow everyone regardless of age and abilities to enjoy sports. The Project aims to include some of these inclusive sports at the 2020 Tokyo Olympics and Paralympics. President Tony then visited consumer giant Panasonic’s headquarters to learn about its latest innovations. Panasonic Singapore is regional headquarters for its Southeast Asian operations, employing about 3,500 staff and working closely with the Economic Development Board (EDB) on several collaborations, including the Total Energy Solution in Punggol Eco-Town.

President and Mrs Tan were housed in the Akasaka State Guest House during their State Visit to Japan. The Akasaka State Guest House was originally constructed as the Japanese Crown Prince’s Palace in 1909, but was hardly used as such. The only Neo-Baroque European-style palace in Japan, it was inspired after the Palace of Versailles. It now houses visiting Monarchs, Presidents and Prime Ministers.

On Wednesday (30 November), President Tony will be hosted to a state dinner by Emperor Akihito.