Minutes from the Fed’s September FOMC meeting showed support for a rate hike relatively soon but implied a go-slow approach. But clearly the pace of rate hike has already been unexpectedly “slow”.

Nothing happened in the first three quarters of 2016, as compared to the market’s expectation of 3-4 rate hikes at the beginning of this year.

It is clear to the market that the expectation for an increase in the federal funds rate has increased, as the implied probability of 25bps rate increase by Dec has now reached a new high of 67%.

As a result, the US dollar index rallied to 98.00- a level that hasn’t been seen since March 16.  A strong dollar has led to lower commodity prices, especially crude oil.

USD/JPY broke through a key resistance level at 104.00 last night and is now trading higher at around 104.50. The next key resistance could be near the 105.20 area.

The concerns over Thailand’s political uncertainty weighed on market sentiment and triggered panic selling. Thai equities tumbled over 8% in the last five trading days, marking it the worst performing emerging market in the region.

The Thai baht has since depreciated 2.5% against the US dollar, a huge move that has not been seen for many years. This could be a result of panic selling of Thai assets to avoid potential turmoil which is yet to come.

The Singapore equity market has been affected too. One of the major benchmark components – Thai Beverage has fallen over 5% yesterday, with the other sectors suffering from heavy selling pressure too.

The Straits Times Index lost 42 points, or 1.5% on Wednesday. It was the second worst performing market in the region followed by Thailand. 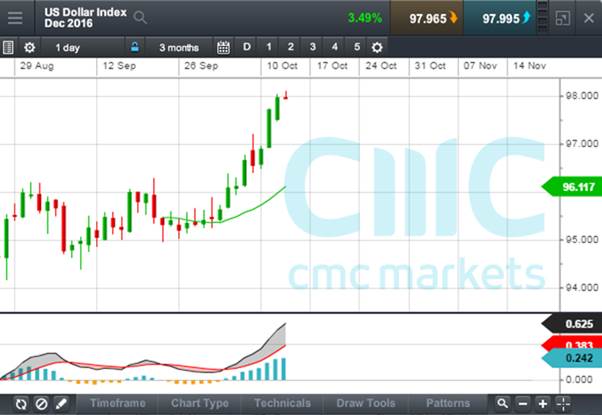