A resident of a new BTO is left flabbergasted when local news media tweaked his story so much that it became a mouthpiece story for the government to place the blame on others.

Jeremy Phua, a resident of Waterway Cascadia, a new Built-to-Order (BTO) located at Punggol Way, had earlier written to various media outlets, hoping that they can help to publicise the frustrations and agony that the residents of his housing estate have been going through ever since they moved in.

Instead of reporting the frustrations of the faulty lifts and how the town council has managed the issue, Channel News Asia (CNA) simply reported that the faulty lifts were caused by renovation debris from errant contractors.

CNA wrote, “The frequent lift breakdowns at a new BTO project in Punggol have been attributed to debris from renovation, as well as the jamming of lift doors while unloading large items.”

Being displeased with how the news carried the story, Phua contacted TOC about the matter.

When asked if he was informed of how the news is being tweaked, Phua said, “Nope. They came, do the filming and just say it will be on the 9pm news. They didn’t mention anything about combining with “experts” and opinions from the MP to make the news become like it is coming from the MP to warn contractors about the misuse of lifts.”

He added, “The reporter even had the cheek to whatsapp me that news will be on in a few minutes without telling me how tweaked it became.” Phua also went to the CNA’s fanpage to voice his displeasure over how the story was presented.

He wrote, “Hi all, after going through this segment again I realised how skewed this article has become. I am the one in the video, I am the one that reported this news. I told the reporter that our lifts are constantly breaking down and this started even before renovation works started. I had called EMS, called Town Council, we have emailed the MP as well but all we got for the past 6 months was that they know about the problem, they are working on it. Nothing is transparent. And also why 6 months so long and nothing is being done? How can you just blame contractors just because you see items along the floor, are they even blocking the lifts? HDB sent a notice saying the fault lies with contractors misusing the lift, and they are sending men to constantly check on it, till now, I see no HDB personnel, no CCTV installed so I don’t know how they are monitoring the situation. This isn’t supposed to be even blaming the contractors for our lift issues. Once again, this shows how the authorities have used the media to tell a different story.”

According to Phua, the residents of the new BTO project started receiving their keys in the beginning of the year and home renovations are still ongoing with less than 50% occupancy rate at the moment.

Phua received his keys in May and moved in September after the renovations are completed. Although It has been just over a month or so, but he has been calling Town Council, EMS almost every other day because of the lift issues his block is having. However, the lift issue is not just with Phua’s block but also the other blocks in the estate.

Phua states that the lift will often get stuck at various levels and stop working. And more often than not, they will stop at a level and the doors cannot close fully. Residents have to push both sides of the door to get it closed so that it continues moving. This happens at every level the lift stops at. Despite the estate being not even fully occupied, yet such issues still come up. Phua’s block is 18-storey high, each level having around 10 units and served by only 2 lifts.

Phua pointed out that being a new estate, there is yet to be a Residents’ Committee (RC) formed. The residents can only call the Pasir Ris-Punggol Town Council and to email their MP who is Ms Sun Xueling from the People’s Action Party for help.

Phua says, however, nothing done has solved the root of the problem. He questions the quality of the lifts that the residents are getting for their supposedly premium estate, given that they were paying about $100,000 more for the same level housing size unit elsewhere.

He commented on this further at CNA’s Facebook page, “I was told by those supposed RC members of the area, “After closing and opening for a while, the lift is still able to move? Still working?” Sounds like “As long as the lift still working, the defects are minor”.”

Phua noted that he has taken pictures, videos and sent his fair share of emails but the only response he got from the authorities was to have the contractors instructed not to damage the lift by stuffing objects to prevent the lift from closing. This to him is just shifting the blame to contractors.

As a normal resident, Phua states that he just wants his lifts to work properly. He says that despite authorities not being able to provide the basic essential of working lifts, yet the residents are paying monthly conservancy fees, even before they started moving in.

Phua lamented, “If I have to call them every day and them sending down technicians to look at the issues everyday, some days more than 1 time, isn’t it a waste of money and resources – why can’t they just put in place a better lift in the beginning?The recent spate of lift accidents is definitely of concern and yet the authorities are not making substantial effort in ensuring we have proper working lifts.” 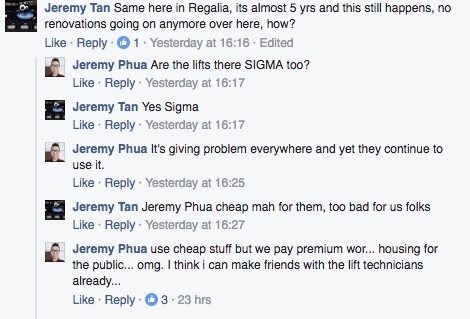 Jeremy Tan, a self-professed resident of Regalia, a freehold condo at River Valley Close, commented that his estate also faces the same problem with the lifts for five years without the presence of renovation contractors and the lifts are of the same model with that at Phua’s estate.

Phua also commented on CNA’s Facebook page about the contract for the lifts, “Would really be good to see how the contract was awarded? is it based on the cheapest? If not, what is the criteria, why did other companies like Hitachi, OTIS, Mitsubishi not get it? Some residents asked – being a premium BTO estate, why are we getting such low-quality lifts? We’re not even asking for aircon or music in the lifts, we just want the lift to perform the basics, to go up and down with minimal faults!”