OPEC members have just reached an agreement on curbing output in their earlier Algiers meeting a few weeks ago.

Putin’s comment showed clear sign that another big oil producer would join the camp in freezing output, since a higher oil price obviously aligns with the national interests of those countries.

The surge in oil prices led to rally in energy stocks worldwide. US equities closed half a percent higher, with the energy sector outperforming (+1.5 percent ).

Euro Stoxx 50 index climbed 1 percent , and this is also led by energy stocks running up 2 percent . The positive sentiment may spread over to Asian markets today.

Singapore’s oil & gas sector and energy stocks may be lifted by the positive development in the outlook of oil prices.

The second US presidential debate wound up as a show of personal attacks between the two candidates and thus revealed little insights on their policies stance.

More could be contributed towards issues on foreign policy, trade and economics. Nonetheless, two earlier polls showed that Clinton has apparently won the second debate.

According to Financial Times, the national polling average also indicates that Clinton is leading Trump by around 5.1 percent , with widening margins after the second debate.

Market would probably enjoy a few more days of ‘risk-on’ sentiment as Trump’s victory – a scenario that most investors do not wish to see – now becomes less likely.

However, we shall all keep an eye on the third debate and the progress of the election campaign. The final election is 27 days away and a lot of unforeseeable surprises could happen. 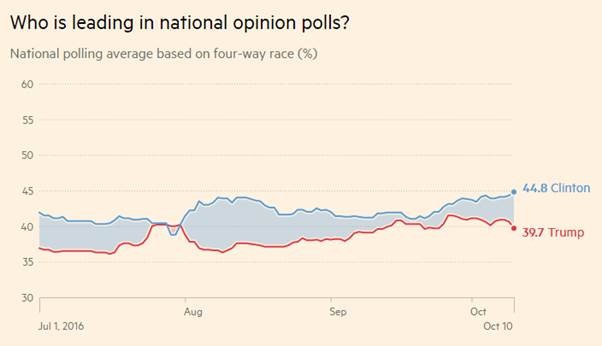