Is this why Singapore football is down in the dumps?

In a shocking revelation at the annual general meeting of the Football Association of Singapore (FAS) held on Saturday, 24 September at the Jalan Besar Stadium, it was revealed that the FAS spent $4.4 million on the failed LionsXII experiment last year.

And while it spent the somewhat exorbitant amount on the LionsXII, only $70,700 was spent on the National Football League, the Island-Wide League, the Football Association Cup and the Singapore 9s.

Football officials who attended the AGM yesterday were livid and could well be the nail on the coffin for the incumbents at the first ever elections for office bearers which could be held by the end of the year.

In a Facebook post, James Lim, who attended as part of Sporting Westlake, an NFL club: “$70,000 in $35.8m expenditure is what local football is worth to FAS.”

In response to his post, Tohari Paijan, a former Singapore Cup-winning coach from Tanjong Pagar said: “Now you know how this great FAS regard NFL league. Whoever involve in NFL as officials, coaches, players should know. For all the sacrifice, $$$ and time.

James also said in yet another Facebook post: “What has gone wrong at FAS – it’s not the lack of funds but rather the application of the funds. Staffing expenditure, Lions XII and the national teams took up most of the $35.8 milllion annual expenditure. And people ask why local football has not done well. MCCY and SportSG should ask why only $70,700 was spent on local football. FAS Deputy President Bernard Tan explained that local football is not a priority.

Bernard Tan, a current Vice President of the FAS, is also a Board Member of Sport Singapore, Singapore’s national sports authority which comes under the auspices of the Ministry of the Culture, Community and Youth. 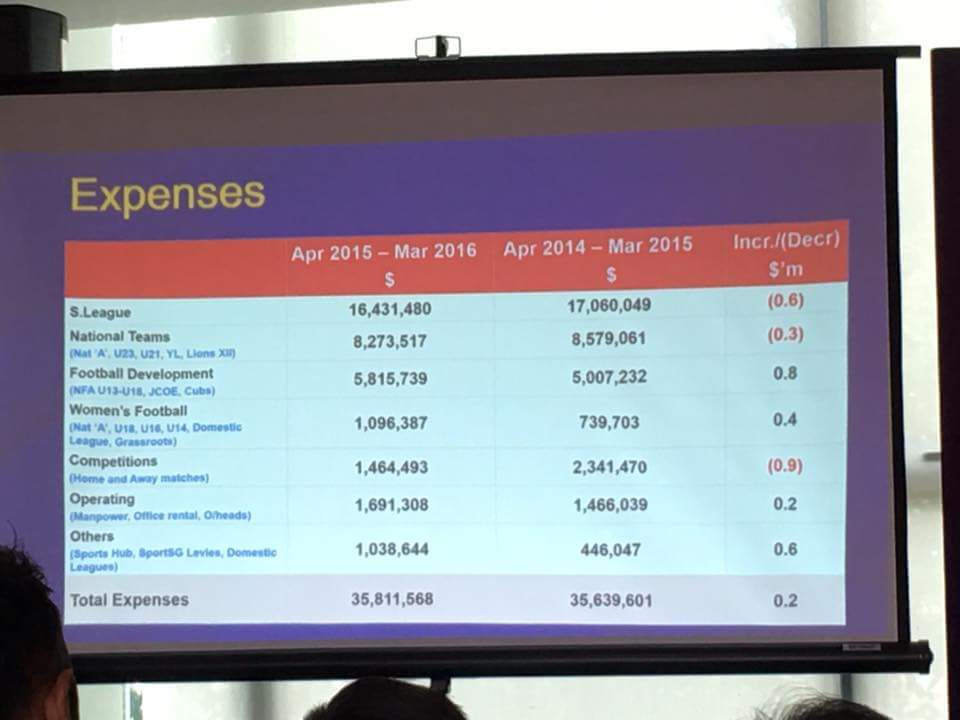 Following the AGM, R Vengadasalam, who is a campaign manager for Team Majulah SG Football asked for current President Zainudin Nordin — Former PAP Member of Parliament who appointed as FAS President in 2009 — to resign.

Mr Vengadasalam believes that Mr Zainudin should quit and allow new faces to run the affairs of the FAS.

The AGM was also cut short following a decision made by the current FAS team after it said that they had been receiving feedback from affiliates.

Initially, a vote to pass the new constitution which was already approved by FIFA was to be held and this latest development will see the elections delayed further.

In response to the delay, Mr Suresh Nair, a former journalist from The New Paper said in a Facebook post that “The voting for the new constitutional changes is now further delayed. Poor sportsmanship, from the incumbents, although they claim they want more feedback from the grassroots. I will, without fear or favour, say that this unnecessary delay will not change the rousing unhappy mood of the football heartlanders (especially from the lower-rung clubs) who definitely want change.”

PrevPreviousHow exactly are MLC members appointed and qualified to advise?
NextWill the debate send volatilities higher?Next
We have a small favour to ask from our supportive readers. TOC is Singapore’s longest surviving alternative media website and we are attracting new readers everyday. TOC’s independent, investigative journalism takes substantial time, money and hard work to produce. Not to mention the same amount of resources to defend ourselves from the persecution. But we soldier on because we believe in the value of our work and your right to information. TOC is editorially independent. We set out own agenda, free from commercial bias, undue influence from billionaire owners, millionaire politicians or shareholders. If everyone who reads our reporting, who likes it, helps to support it, our future would be much more secure. For as little as USD1 a month or subscribing to us, you can support our work and consequently preserve the sanctity of press freedom. We appreciate your valued help and it means more to us than you can ever imagine!