Four suspects charged one count of mischief by fire, Police appealed for the fifth suspect

Four suspects involved in a case of fire at an entertainment outlet inside St James Power Station on Tuesday (13 September), were charged in court on Thursday (15 September) and Police is appealing for information regarding a fifth suspect at large.

The Singapore Police Force announced on Wednesday (14 September) that it received a call requesting for assistance on 13 September 2016 at about 2.25 am.

The statement said that officers from Clementi Division immediately responded to the scene where they discovered fragments of broken beer bottles and soot near the entrance of the said entertainment outlet.

The investigations revealed that four bottles filled with petrol were believed to have been lit and thrown by three unknown men. The three of them were spotted to have fled the scene immediately after the incident. Fortunately, nobody was injured.

As the result of the investigation, the identity of the first suspect was established and he was arrested within 20 hours of the report lodged. The identities of the other accomplices were subsequently established and they were arrested in separate operations mounted on 13 and 14 September 2016.

The Police said that the incident was an act of revenge arising from a previous dispute between one of the suspects and the staff of one of the entertainment outlets at St James Power Station.

The case will be mentioned again on 22 September.

The Police is appealing for information regarding Daryl Tay Kai Long, 26-year-old, who was said to be involved in the incident and is remain at large. Anyone with information on Tay Kai Long, Daryl can come forward and contact the Police at 1800-255-0000. You can also submit the information online at http://www.police.gov.sg/iwitness. All information will be kept strictly confidential. 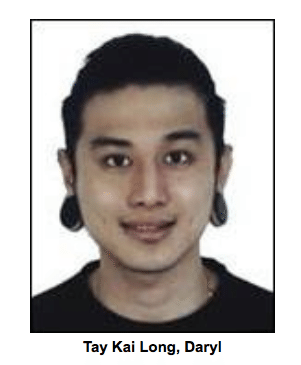