Hong Kong Land jumped 5.5% on Wednesday as HK’s property market is on track for improvement on alleviated concerns of an interest rate hike and low unemployment rates. HK’s office market may continue to be supported by demand from Chinese financial institutes. HK Land’s raising of rents was supported by fewer vacancies of Grade-A offices in central with no new supply in the district this year.  Its 2Q earning results will be announced on 28th July.

Wilmar International, on the other hand, has tumbled over 6% after issuing a profit warning on Tuesday that it expects to report a net loss of US$ 230 million for 2Q16. The loss was mainly attributed to untimely purchases of raw materials, in particular soybean.

SMRT opened 7% higher this morning, as Temasek has announced an offer to buyout SMRT at $1.68 a share on Wednesday.

The US dollar continued to strengthen, backed by strong housing starts data, which showed US construction activities rose more than expected in the US. AUD and GBP both fell against the greenback. JPY softened further to 107.20 on expectations that the next BOJ meeting will likely introduce more stimulus.

UK’s unemployment rate has fallen to 4.9% in June, to the lowest level since 2005. The unemployment claim was notably lower than expectations. This signals continued improvement in Britain’s job market, which will probably bring resistance to an immediate rate cut by the BOE. GBP soared more than 1 per cent against USD after the release. 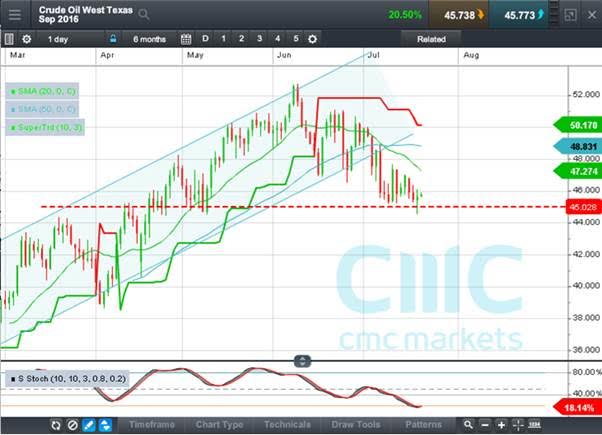