Media bias against Dr Chee: He wasn’t exaggerating that he had a mountain to climb in order to win

By Donovan Choy
To call the electoral process in Singapore free, is akin to saying a prisoner is free because he gets a whole hour in the courtyard daily to do whatever well he wishes.
The department that conducts elections is a department under the Prime Minister’s Office itself. Whether it be drawing constituency boundaries, monitoring campaign spending limits, designating rally locations or allocating manpower for the elections, every facet is subject to the Prime Minister Office’s discretion.
Not only does this decision-making process not include oppositional input, the entire process is done behind closed doors – as if the PAP was taking part in the elections all by themselves.
Consider for a moment or two the public uproar if the planning of the entire 2014 FIFA World Cup tournament were dictated solely by a German committee (they won the cup); if a pet contest judge had his very own chihuahua running in the contest; if the United Nations, an organisation pledged to promoting international cohesion, was really run by one nation?
The Elections Act allows a period of as little as 9 days to a maximum of 8 weeks for campaigning. Opposition parties have never been afforded any more above the bare minimum of 9 days since 1963. What better way to demonstrate this than to look at the ongoing Bukit Batok by-elections: Nomination Day was on 27th May, Cooling and Polling Day is on the 6th and 7th of April respectively. You can count the days with your fingers.
In the U.S., we hear politicians campaigning and rallying months and years before even any actual polling takes place. In “democratic” Singapore, citizens are expected to make up their mind and cast a vote that will determine their leaders based on a 9-day crash course of rallying.
The Films Act restricts opposition parties (and filmmakers) from producing political films or videos, amended in 2009 to outlaw the filming of “illegal” events – meaning unapproved public demonstrations – but perfectly acceptable if filmed by the licensed broadcast media.
The Political Donations Act, enforced by the aforementioned Elections Department, obstructs foreign funding not only for political parties, but for organisations that the government deems to be “political in nature” (news sites, activist groups etc) – a convenient tool that must come in handy for silencing and crippling inconvenient political forces. Large donations must be registered in name, deterring donors who prefer anonymity.
The Public Order Act deters parties from making public speeches unless they go through a vigorous, bureaucratic process to apply for a police permit, approved mere days in advance, leaving them with little to no time to organise speakers, send out invitations and so on.
What about our media? Anyone who’s even bothered to take a look at the state media apparatus now and then needs no further elaboration. For those who don’t, just take a look at the orgy of frenzied, gung-ho attacks on Chee Soon Juan that were published yesterday (1st May) in the Straits Times.
On page four of the main section, the entire page (split into two) is dedicated to the Prime Minister’s precious opinions, one of Chee’s “hypocritical” character, another fanning the non-existent flames of voters voting based on race.

An entire page!
On page two of the section Insight, there is a juxtaposition of Murali “back on familiar ground” to Chee’s so-called “test of his political makeover”. 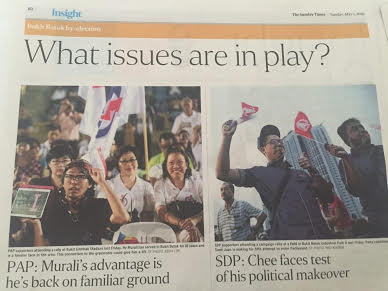 While the PAP candidate is portrayed to be right at home in Bukit Batok, the opposition candidate must first surmount this imaginary political test of character. Murali must be beside himself with rapture considering how half the Central Executive Committee is getting involved in his campaign for him.
This extensive coverage dedicated to rehashing and attacking Chee Soon Juan’s history by the PAP’s higher-ups all across the board of the print and broadcast media has been particularly effective at framing the by-election debate around “Is the opposition candidate even fit to run?” instead of “Who has the better policies?”.
No doubt, PAP jingoists like Calvin Cheng will gleefully endorse these political attacks while denouncing “Western liberal media” for its adversarial nature with the very same hypocritical breath and birdbrained mentality.
All of the above and much, much more unmentioned aptly demonstrates the farcicality of democracy in Singapore. For one to say with a straight face that our elections are free, is for one to be either truly ignorant or downright dishonest.
Chee Soon Juan said that he had a mountain to climb in order to win. He wasn’t exaggerating.

Dining in, indoor mask-off sports in groups of 2 persons will be allowed to resume from 21 June onwards