by The Online Citizen
in Community, People
3 min read
22

Calvin Cheng, a former Nominated Member of Parliament and current member of the Media Literacy Council recently shared his ideas of how to tackle ISIS, which involved killing not just the extremists, but also children.

The sequence of events is laid out below.

Calvin Cheng advocates killing children because their parents are terrorists.

Cheng is on the Media Literacy Council (MLC), which is meant to oppose hate speech and promote responsible social media use. Members of the public wrote to Tan Cheng Han (MLC Chair) to complain.

Don’t forget, MLC is concerned with speech in a ‘personal capacity’ too.

MLC cites Cheng saying it was a small-group discussion on armed child soldiers.

Actually it was a widely shared public Facebook thread. 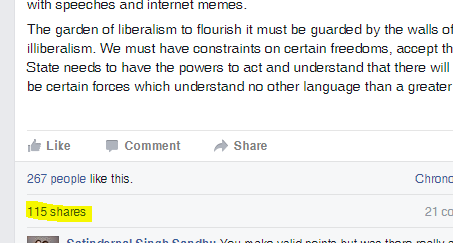 And Cheng introduces child soldiers to the thread only much later…

…after repeating that he supports exterminating families to prevent revenge.

MLC is supported by MDA. Where is its accountability to the public in upholding its own stated values?

The Media Literacy Council has not yet responded to the final email.

Calvin Cheng has published a blog post elaborating on his view, entitled ‘Killing Children’. In it, he writes:

An entire generation of children under ISIS including their own, have been ‘brainwashed’ to see anyone not subscribing to their ideology as enemies, and should be killed.  They fight like adults and replace the adults when they are KIA.  This leads to a 20 to 30 year problem, especially since “It takes a significant amount of time and money to rehabilitate child soldiers, experts say”.