In 1959, the people of Mountbatten voted in a female opposition candidate. She successfully campaigned for change on a nationwide level and the result was the passing of the landmark Women’s Charter in 1961. Mountbatten voted and Singapore evolved.

The odds were stacked heavily against Seow Peck Leng. She took part in the 1959 General Election as an opposition candidate and faced four other opponents, including a PAP candidate. She emerged victorious.

Her underdog status did not end after elections. When Seow Peck Leng entered parliament, she was an opposition MP facing an overwhelming PAP majority. Furthermore, she was the only female opposition MP in a male-dominated Legislative Assembly during her term. Undeterred, Seow Peck Leng embarked on a nation-changing cause for women and again emerged victorious. 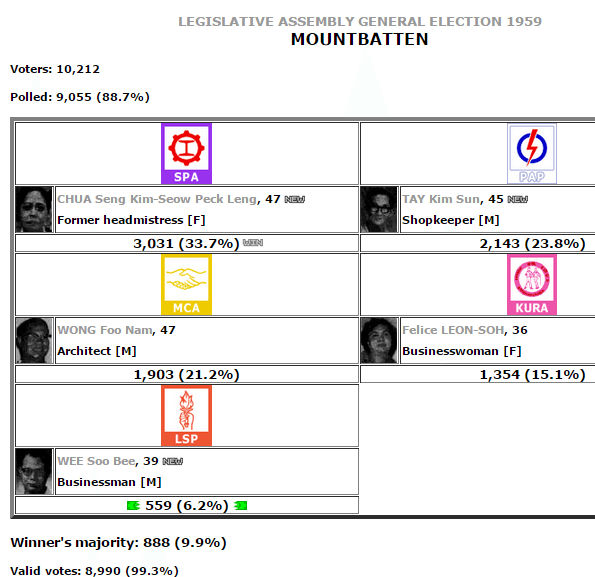 Seow Peck Leng dared to dream big. She envisioned a Singapore where women and men stood on equal footing. A future in which polygamy was abolished and wages were paid equally. Mountbatten believed in her ambitious vision and voted to allow her to represent the community. In return, Seow Peck Leng gave Mountbatten a noble cause to fight for and a new identity.

Mountbatten hitched its fortunes to Seow Peck Leng and she became the spirit of the community – a fiery, passionate, noble leader representing her community on a national stage. Both Mountbatten and Seow Peck Leng became synonymous in the fight for gender equality across Singaporean society.

Seow Peck Leng was more than a mere politician and Mountbatten saw that in her. She tackled a large problem in society and dared to envision a better Singapore. Mountbatten endorsed her and in doing so, backed her vision. Mountbatten voted for Seow Peck Leng to the Legislative Assembly and Singapore experienced genuine legislative progress.

Despite being an opposition Assemblyman, she successfully reached across the aisle and worked with the PAP to achieve a goal of national importance. She reminded the PAP of their pledge in their manifesto, and worked with them on constructive legislation. She could have spent her term opposing the PAP; but instead, she worked with them, and together they produced ground-breaking legislation that took provided national leadership and took into account the needs of all Singaporeans. 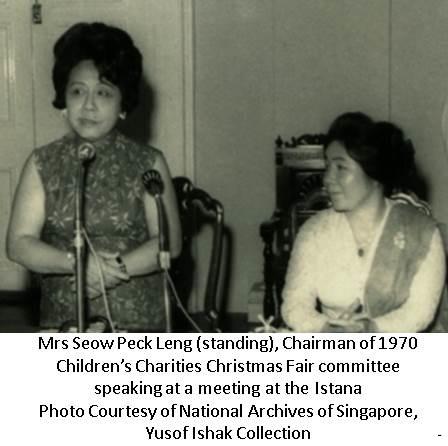 I believe that the story of Seow Peck Leng shows what a leader of a relatively small SMC can do for people all over the nation when given the opportunity. Seow Peck Leng gave Mountbatten a glimpse of an alternative Singaporean narrative in which both genders were equal in and out of the workplace. When Mountbatten endorsed her and gave her the platform as a Member of Parliament, she immediately set out to achieve a nationwide goal. Her parliamentary term brought about the passing of the Women’s Charter, which paved the way for ground-breaking change in Singapore.

Seow Peck Leng was an inaugural member of Singapore Women’s Hall of Fame.  As Singapore turns 50, it’s a good time for us to remember the contributions of a pioneer Singaporean and Honourable Member of Parliament for Mountbatten.

Seow Peck Leng has passed on, but her spirit remains in Mountbatten. She rose dauntless to meet the challenges of her day, vindicating her voters for having chosen her over others to be their voice in parliament.

Today in Singapore, the tried and tested solutions are either becoming less and less effective, or not effective anymore.  As we grapple with the many national issues which hog our conversations, we will do well to recall the trailblazing, feisty spirit of Seow Peck Leong.  In those days, the people of Mountbatten boldly elected a bold lady, and the nation took a big step forward.

Shall we repeat history?

This article was first published at Ms Jeannette Chong’s blog.