Another complaint about BreadTalk repackaging others’ products as its own 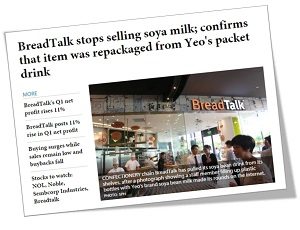 After complaints that bakery BreadTalk had repackaged its soya bean milk drink and sold them as “freshly prepared”, another complaint has been posted online – this time about the bakery using its competitor’s products as its own.

“Saw the staff take out a Bengawan Solo box,” a Facebook user, who only want to be known as “Lim”, posted online on Facebook, referring to the other popular bakery. “As i was wondering why there was a box from their competitor, the staff proceeded to take out the kueh lapis cake and starting spreading frosting over it.”

“Not only does Breadtalk take Yeo’s soyabean and repackage it as their own, they also repackage other’s bakes as their own,” Lim said. “Just apply ur [sic] own frosting and decoration over the cake and sell it as ur product? Not entirely appropriate right, cos i might think the cake is nice and since i bought it from Breadtalk, it should be baked by breadtalk, not bengawan solo.”

Lim’s complaint follows that of a person named “Kev” on Monday, who posted a photograph showing a BreadTalk employee filling up plastic bottles with Yeo’s brand soya bean milk which were then labelled “freshly prepared”.

The bakery clarified and apologised for the incident on its Facebook page later.

“We have heard our customers’ feedback about our bottled soya bean milk,” the bakery said. “We would like to apologise for any misaligned presentation or wrong impressions created, and clarify that it is never our intention to mislead.”

A spokesman told the press that the bakery will resume selling the drink out of labelled drink dispensers instead “to prevent misunderstanding.”

“As a global bakery chain, we source for quality ingredients and products from established and reputable third party suppliers around the world, including from renowned local brands to enrich the variety of products sold at our stores,” BreadTalk said.