That was how the Government-controlled local press once asked of the professionals, managers, executives and technicians – or PMETs.

Prime Minister Lee Hsien Loong, however, seems to now admit that the problems faced by this group of Singaporeans are in fact real.

After insisting for years that “foreigners do not take jobs away from locals”, Prime Minister Lee Hsien Loong has now tacitly admitted that perhaps they do, and this has affected the PMETs in particular.

The government’s position on foreign workers or foreign talents, however, was not always so.

“I hope Singaporeans will look at the contributions of foreign workers objectively – they are not here to steal our jobs, but to help us enlarge the economic pie,” Mr Lee said in his May Day Rally speech in 2008.

Now, he says such competition between locals and foreigners present him with a “problem”.

“[When] a PMET comes to compete with a PMET, I have a political problem,” Mr Lee said in an interview with Ambassador-at-Large Professor Chan Heng Chee on Sunday. 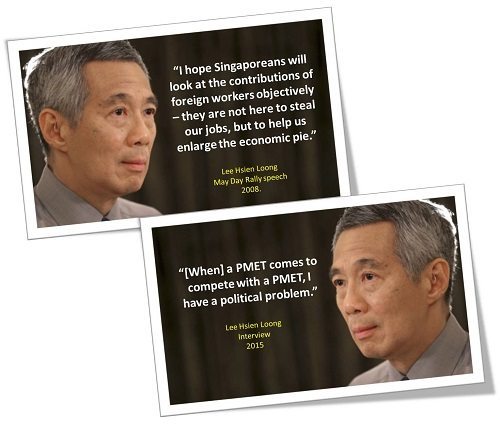 Prof Chan had asked Mr Lee how the government would address the concerns of PMETs “who worry that foreigners are prepared to come in to work for less pay and they are marginalised.”

“So, how do you stop PMETS from being passed over and lose out as a result?” she asked.

Mr Lee replied that the situation has changed somewhat from earlier days when “the PMETs were a very small portion of the population.”

“And so if you are a PMET, you are at the top 10 per cent,” he said. “You are presumed to know to how to look after yourself and the numbers are not big, but now PMETs are maybe half the workforce.”

“I think that we have to make sure that the PMETs get a fair opportunity, that they fairly treated and that we are not overwhelmed by an inflow which is squeezing our own people,” he said, apparently admitting that the influx of cheaper foreigners is a danger to locals losing their jobs.

Mr Lee cited the government schemes which have been introduced to help PMETs.

Nonetheless, Mr Lee said that “there will always be frictions when you have a foreign worker population or immigrant population in the country” and that the government would have to “manage that”.

Mr Lee’s remarks in the interview is a somewhat different take on the issue of foreign workers or foreign talent.

In his May Day Rally speech in 2008, Mr Lee had insisted that “foreigners do not take jobs away from locals”, amidst complaints that Singaporeans were being passed over in jobs by employers who preferred foreigners.

And in 2011, Mr Lee was again adamant that “foreigners create good jobs for Singaporeans”.

In a 2011 Yahoo report, Mr Lee was reported thus, when defending the government’s open-door policy on foreigners:

“PM Lee cited statistics to rebut the notion that foreigners are competing with Singaporeans for jobs. He said that of the 1,200 workers at IM Flash Singapore, six in 10 employees are Singaporeans and permanent residents (PRs), and four in 10 are foreigners.

“Without the foreign workers, we would not have attracted this US$3 billion investment, and Intel and Micron would have built its wafer fab elsewhere,” said PM Lee.

“I think that is what Singapore needs to do – to be aware, to be paranoid so you always know that somebody can take your lunch away,” he said last year, 2014.

But in 2015, in an interview with the Financial Times, when Mr Lee was asked  “if Singaporeans still need to feel insecure” about their future, his response was:

“You don’t have to be paranoid but you do have to take risks very seriously.”

While the results of government support schemes are yet to be seen – whether they will indeed give locals a fair opportunity when it comes to jobs and wages – what is also disconcerting is how young these Singaporeans are who are finding it hard to find jobs and need help from the government.

A recent Ministry of Manpower (MOM) report showed “that close to three in four workers retrenched in the first quarter of this year were professionals, managers, executives and technicians, compared with one in two last year,” the TODAY newspaper reported.

“Over half did not find new jobs within six months.”

Workers aged 40 and above took a longer time to find jobs, compared to younger ones.

Older PMETs have got it worse, and needing more support in finding jobs after being retrenched.

This was why Career Activation Programme — a tie-up between the National Trades Union Congress (NTUC) and local social enterprise GioCareers – was recently introduced to provide support for older unemployed PMETs.

“Hopefully somebody ‘up there’ reads this and improves the predicament of many like myself,” said Mr Long, 58, in a recent Straits Times report.

Mr Long used to work as a general manager in the oil and gas industry, drawing some $15,000 a month.

Now, it takes him eight months to make that much – Mr Long now works as a taxi driver after having lost his job, and after having spent six years looking for another one.

“I’m not asking to become a GM again, I just want to be somewhere I can contribute with my experience,” he said.