A 48-year-old Permanent Resident (PR) from the United Kingdom is suspected of assaulting a 37-year-old financial consultant and drove a car towards the other, charged on Tuesday morning.

The accused, John Duncan Tasker faces two charges, namely for the use of criminal force and for driving rashly towards another driver, Yi Yongjie.

The accused was charged on Tuesday morning and will have the hearing next month on 25 August.

The incident is said to have happened at the car park of Parkland Green, East Coast Park, on 30 May (Saturday) around 6:10pm.

Mr Yi was waiting for a parking lot after dropping off his wife and kids at the car park when a silver colored car, driven by Mr Tasker, came driving in against the flow of traffic.

The car then parked in front of the space that Mr Yi was waiting for with his hazard light turned on. As a result, Mr Yi drove his car forward, in front of Mr Tasker’s car and wound down his car window to confront the latter.

According to Mr Yi, Mr Tasker alighted from his car and starting scolding him, calling him “an idiot for being slow”. An argument then ensued between the two men.

All of a sudden, Mr Tasker punched Mr Yi through the car’s window and walked back to his car. 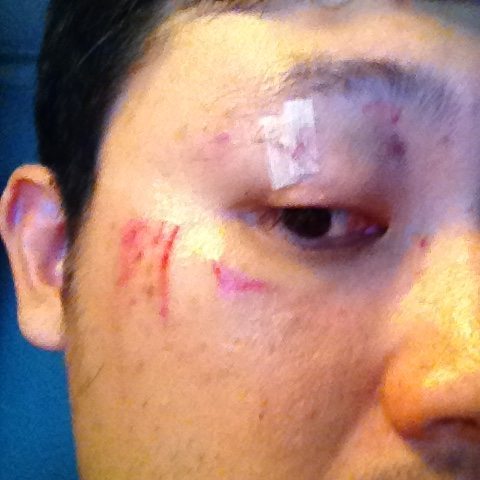 The force of the punch was so great that it broke Mr Yi’s glasses and resulted in bleeding on his face.

Despite being stunned from the punch, Mr Yi hurried down from his car and tried to take down the Mr Tasker’s car license plate number.

“I stood in front of his car and he just stepped on the accelerator, trying to run me over while escaping.” said Mr Yi, who was subsequently treated at Changi Hospital for his injuries.

If convicted, the accused faces up to two-years’ imprisonment or a fine of $5,000 dollars, or both.

In an article about the visit of the British royalty to Singapore three years ago, Mr Tasker was reported to be formerly from the British military and he was once a personal protection officer for the late Princess Diana.

“Among those present were former members of the British military, including 45-year-old John Tasker. His 15-year military career included a stint as a personal protection officer for the late Princess Diana.” (see link)

In his LinkedIn account , apart from listing his current occupation of the Chief Operating Officer at The JLC Group of Companies (a privately held entity with offices in both Singapore and the United Kingdom). Mr Tasker identifies himself as a grassroots leader in his local community in the position of vice-chairman of a Neighbourhood Committee, a grassroots organisation under the aegis of the People’s Association.

He says his role as a grassroots leader include organising and managing community events and “ad hoc meet the people session with our local MP, Dr Maliki Osman.”

Here is a photo of a get-well card and flower bouquet which Dr Maliki’s had apparently sent to Mr Tasker.

Update: John Duncan Tasker’s Linkedin account has since been deleted. For people who are interested, we have saved his profile in a pdf file.