Will Mrs Lee get a huge bonus on the back of Temasek’s results? 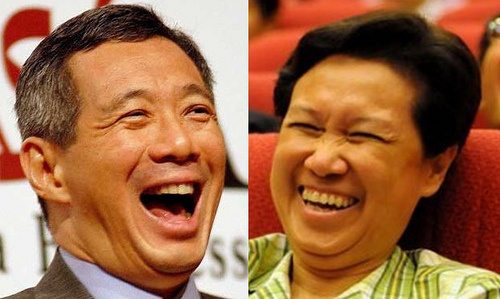 There was a palpable sense of self-congratulation in Temasek’s announcement of its latest results a few days ago. Taken at face value, Temasek’s latest results for the year to 31 March 2015 look pretty impressive. They announced a Total Shareholder Return for the year of 19% in Singapore $ terms and a rise in the net value of the portfolio to $266 billion. This was better than the company’s claims, though not independently audited and highly dubious, of a return of 16% p.a. compounded since inception.

However, as the Chairman himself admitted in his statement, this seemingly impressive result was largely on the back of the strong performance of their Singapore and China assets, which made up 28% and 27% of their portfolio respectively at the end of the year.

There are three questions:

Did Temasek Outperform the Relevant Indices over the Period? 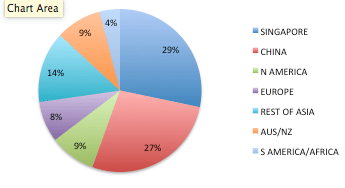 The performance of the different geographic indices and what Temasek’s performance should have been if it had matched the performance of the weighted average of these indices  are shown in the graph below. I have made the comparison both for the year ending 31 March 2015 and for the period since then up to 10 July 2015.

The results are shown here: 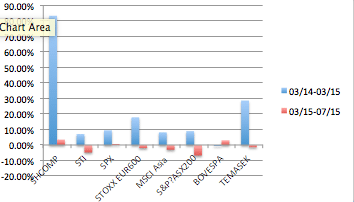 As can be seen from the graph, if Temasek had just matched the weighted average performance of its portfolio’s geographic sub-indices its results would have shown a gain of nearly 29% rather than the 19% it in fact achieved. So Temasek’s managers actually underperformed by about one-third compared to if they had been following a passive index-following strategy.

That is bad enough. But the performance would probably have been worse if there had not been a favourable boost from currency depreciation.

Temasek’s results are measured in S$. If I assume that Temasek’s managers do not hedge their currency exposure, which is unlikely given the size of their portfolio relative to the economy, then a fall in the S$ relative to the currencies which make up the portfolio would be positive even if the equity values in the base currencies had not changed.

During the year to 31 March 2015, the Singapore Dollar ($) fell by almost 8% versus the US$ while the Chinese Yuan (RMB) was almost unchanged against the US$ over the same period. So currency depreciation would have added a favourable headwind to Temasek’s results for its Chinese portfolio but the $’s trade-weighted value, as measured by the Bank for International Settlements was not much changed over the period. Offsetting the favourable boost to the Chinese results, the Euro fell by 17% against the S$ over the same period though European stocks were only 8% of the portfolio, less than a third of the proportion of Chinese stocks.

Overall there would have been a positive boost to Temasek’s portfolio from currency movements but the net result would probably have been fairly small so I will ignore it for the sake of the analysis.

Question Marks over the Valuation of the Remainder of the Portfolio

There are also question marks over how the rest of Temasek’s portfolio is valued. We have no information on the performance of Temasek’s unlisted portfolio, its property holdings, or the share managed by third parties. If it owns a lot of shopping malls in second-tier Chinese cities then we should probably be concerned.

One glaring case of overvaluation is immediately apparent. During the year Temasek acquired most of the shares in Olam which would probably have gone bust without Temasek’s  support. If Temasek valued Olam at the market price on 31 March 2015 then it valued its own stake at roughly $4 billion. If we assume that Olam’s equity is probably worthless on a stand-alone basis and subtract that from Temasek’s portfolio value, then the gain for the year comes down to only just over 17%.

How Has Temasek Performed Since 31 March

Despite the jump in equity valuations in China and the rest of Asia during the 2014 financial year, global macroeconomic prospects continued to deteriorate. This deterioration picked up pace in the first half of this year with negative growth being recorded in the US in the first quarter and the Chinese economy probably having slowed to close to zero growth, whatever the official statistics say.

From the graph above we can see that as of Friday Temasek’s portfolio would have been down slightly compared to its 31 March valuation if it had matched the performance of its component geographic indices. The Shanghai index in particular had fallen some 3.5% compared to its 31 March level. Even that was after a big recovery in Chinese stocks after the Chinese government vowed to support the market.

The fall in the Chinese market is likely to resume after a brief bear market rally despite the brave words from Temasek’s management that they see the Chinese market as still cheap at these levels. Even if the Chinese market recovers, the Chinese premier’s political fortunes are now tied to holding the market up, just as ironically the PAP’s are tied to keeping the HDB housing bubble going. This means that Temasek’s 27% portfolio allocation to China will probably be locked in and politically difficult to sell.

These are all good reasons to discount Temasek’s gains in the last financial year. We should consider whether Temasek’s management is adding any value when they have so badly lagged the market even without considering potential question marks over valuation and the illiquidity of their Chinese holdings.

Do we need not one but two Sovereign Wealth Funds, run by Singapore’s “natural aristocracy”, when we peasants receive no benefit from them? That is why I have called repeatedly for them to be listed and shares distributed to citizens who will own them directly.

How much will Temasek management get away with paying themselves?

Instead our aristocrats will likely use these paper gains as an excuse to reward themselves even more richly.  Hedge funds report their results after deduction of performance fees which are usually around 20%. It is possible that Temasek’s results are reported after deduction of a performance fee paid to senior management (of which the lion’s share would go to Lee Hsien Loong’s wife).

Even if the performance fee was just 10% this would mean that Ho Ching could have earned several billion dollars this year. Given her generosity towards her subordinates, including Ms Chua at SingTel and  General Kuek at SMRT, such outsize remuneration, though improbable, is not beyond the realms of possibility. Until we start standing up for our rights and demanding accountability for our money, we are never going to find out.