On Sunday, the minister in charge of the Ministry of and Family Development (MSF), Tan Chuan-Jin, posted on his Facebook page about what a group of youth has told him about the lives of some cardboard collectors in Singapore.

Some of these collectors were doing this “to supplement” what they have, and  “as a form of exercise”, Mr Tan said, referring to the findings by the youth group.

Mr Tan had joined the group, who are youths from Youth Corp, on a project they were doing – devoting their weekends over two months “to befriend the cardboard aunties and uncles on the streets in the Jalan Besar area.”

The youths then shared their findings with the minister.

“The normal perception that all cardboard collectors are people who are unable to take care of themselves financially is not really true,” Mr Tan said. “There will be some who do this as their main source of income. Some do so to supplement what they have. Some prefer to earn extra monies, treat it as a form of exercise and activity rather than being cooped up at home. They do this to remain independent, so that they can have dignity and not have to ask their families for help.”

He added that “[more] often than not, people make judgements without finding out the facts of the matter, in this instance, the stigma surrounding cardboard collectors.”

However, Mr Tan did not elaborate who these “people” who “make judgements” were in particular.

Nonetheless, he said that “for those who genuinely need financial help because they are unable to find other jobs to supplement their income from cardboard collecting, the government will do what it can to help these people.”

Mr Tan’s remarks, however, have raised howls of protests from the public, many of whom have criticised him for being out-of-touch and putting a spin on the lives of the elderly aunties and uncles who pick cardboards for a living.

Specifically, Mr Tan’s remarks that some of these elderly folks picked cardboards “as a form of exercise” was met with disbelief.

Some who have had personal experiences or encounters with these folks posted their reactions, debunking the claims by Mr Tan.

While the minister may have been relating what the group of youths had told him, still some felt that nevertheless his remarks were insensitive and amounted to whitewashing a sad situation – that in a first-world country, there are such elderly folks, some as old as 70- and 80-years old, needing to slog under the unforgiving weather of Singapore, just to make a few cents or a few dollars each time.

Mr Vincent Leow, who said that he has helped some senior citizens who collect carton boxes, reminded the minister that “outsourcing” such surveys as the one done by the youths, “will only paint the picture you want to see.”

Mr Leow added, perhaps contrary to the perception that the minister may have, that “[there] are many out there who are suffering.” 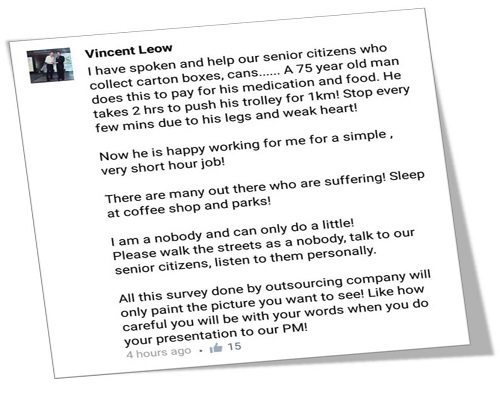 Mr Kevin Chung, who had interacted with an elderly woman and bought her meals a few times, posted: 17-year old Ariffin Sha related how his group of youth volunteers at “Happy People Helping People Foundation” have been working with cardboard collectors for the past couple of years.

“[We] can attest that if given a choice not to collect cardboard and rest or work somewhere else, most [of the cardboard collectors] will take that choice without hesitation.”

“Slogging it out under the scorching sun while pushing heavy loads is not something many do ‘for fun’ or ‘to exercise in their free time.'” 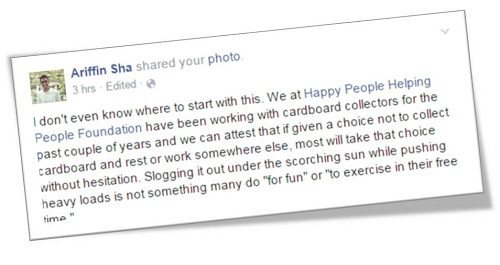 Mr Perry Tan, who lives in Joo Chiat, attests that “they are not doing it to pass time or keep fit.”

“A few are homeless and sleep at the sidewalks of the shophouses,” Mr Tan said, apparently referring to his estate. “One of them slept nightly on a plastic chair in a coffeeshop opposite my unit for 2-3 years until he got taken away by an ambulance one day – never saw him since.” 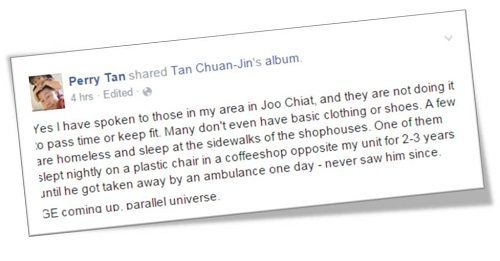 Ms Lynn Lee also spoke of the same elderly man whom Mr Tan above was referring to. The man, said Ms Lee, was probably a constituent of Marine Parade GRC, the area under the minister’s charge.

“I doubt his MP Tan Chuan-Jin has ever met him,” Ms Lee said, “or many of the other karang guni trying to eke out a living in the area though.”

“If he did, the Minister would have realised that most of these people don’t push a heavy cart under the hot sun, every single day, ‘as a form or exercise’, or just so they can ‘supplement their income’. I’m sure there are cardboard collectors who find their work fun, relaxing and dignity-restoring. The Minister is a lucky man to have met all two of them.” “Belacan Cili Padi” also posted her reaction to Minister Tan’s remarks and asked if he had taken the time to truly know the cardboard collectors. One of the strongest reaction to Mr Tan Chuan-Jin’s post was from Mr Gilbert Goh, who works with Transitioning.org, a self-help and counselling set-up.

“We did two cardboard collections with a elderly woman at Chinatown late last year and her experience told us that it is not as fun as Minister Tan would suggest,” Mr Goh posted on his Facebook page.

Mr Goh said he has also heard of two elderly cardboard collectors who lost their lives on the streets in traffic accidents.

“She also has to compete with PRC collectors nowadays and has to wake up earlier so that she has the first bite at the cardboard before it is all snatched away.

“Our belief is that our elderly should not even be doing such tough manual work in our prosperous first world economy even though some may enjoy the work for personal reason.

“I have travelled widely to many first world countries and have never see their elderly work as hard as ours in their twilight years.” “I don’t think the minister and the Youth Corps volunteers are being malicious or insincere,” Mr Goh said. “They are not trying to whitewash the poverty issue. The problem is this. They committed the basic error sociologists would warn our students against in social research: accepting what people say in surveys or interviews as representing the truth without contextual and deeper interpretation.”

He added, “It would have been good if, using ethnography, a young researcher followed a cardboard auntie for a week, be her assistant, to find out how her world looks, feels, means from her point of view.”

Nonetheless, at times the lives of these elderly collectors are indeed a struggle, as one such senior woman told Mr Gilbert Goh.

Mr Goh had interviewed the lady on one of his rounds helping the less fortunate.

The woman had told him that foreign karang guni (rag and bone) collectors had warned her to stay away from “their territory” in Chinatown.

“They not only steal our rice bowls, they also bully us,” she said.

The elderly woman was visibly upset when she was telling Mr Goh her experience.