In yet another attempt to sling mud at local activists, “Fabrication about PAP”, a fanpage aligned to People’s Action Party posted a photo of blogger Roy Ngerng, along with a group of people at the airport.

In the initial post, it wrote, “Jobless, unemployed, in financial problem, he said one. Someone so fast on another all paid holiday trip oversea to bad mouth Singapore to get funding? Seen at Changi T1 just now.”

The photo was taken at Changi Airport Terminal 1 without the knowledge of Roy Ngerng and his companions.

TOC confirmed with Roy Ngerng that he is there only to send activist and social worker, Vincent Wijeysingha off at the airport.

Earlier in the day at the High Court for his defamation suit with the Prime Minister Lee Hsien Loong, Roy had said that he is to serve National Service next week from Monday onwards for two weeks.

TOC understands that from an earlier interview with Mr Vincent that he is departing to New Zealand where he has secured a job. This after allegedly having local job opportunities disrupted by Internal Security Department of Singapore. 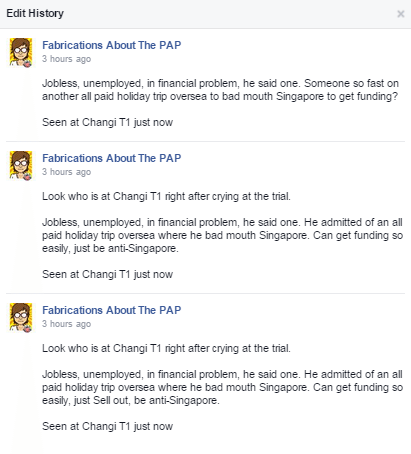 The administrator subsequently changed the write up to say that Roy has confessed about a formerly funded trip. However, many of the viewers were given the impression that Roy was going on an overseas trip despite claiming to be in financial difficulties.

TOC understands from sources that the administrator and contributors of the fanpage are in contact with PAP MPs.