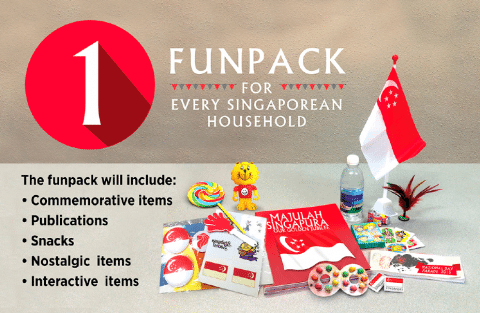 “SG50 is a nationwide effort to celebrate our country’s 50th birthday in 2015. That’s a huge milestone – 50 years of independence! This is a momentous event for Singaporeans to reflect on how far we’ve come together as a nation and people.”

“This is our country, and our celebrations couldn’t be more meaningful if everyone got involved in a big way,” its FAQ page urged.

And one of the things which would get “everyone” involved in the celebration is the National Day funpack.

This year, because it is a special and unique jubilee celebration, the Government has announced that “every Singaporean and PR household will receive a SG Funpack.”

That’s 1.2 million households, the Minister of Defence, Ng Eng Hen, revealed in a Facebook post a few weeks ago.

The total cost of the packs is a reported S$10 million.

So, how does one get hold of it?

This is where the grassroots organisations (GROs) step in.

“Your grassroots organisations will let you know by 15 July how you can collect the SG Funpack,” says the cards which are sent out to the households the last few weeks.

The cards are a notification from the “grassroots adviser” to the GROs which, invariably, is a member of the People’s Action Party (PAP), or a PAP Member of Parliament (MP).

What is curious is why is there a need to employ precious resources to send out a card just to notify residents that they will, in turn, be notified by the GROs of when and how to collect the funpacks?

According to Mr Ng’s numbers, these would mean 1.2 million such cards were sent out.

One can’t help but imagine that these cards are nothing more than free publicity for the PAP MPs.

For why could not such cards be sent by the GROs themselves when it is time for residents to collect the item?

Also, it is believed that those in opposition Workers’ Party (WP) constituencies receive the cards from the grassroots advisers, and not from the WP MPs.

Here is one such card, sent to a resident living in WP-held Serangoon – the card is signed off by the adviser to the GRO of the area, and not by WP MP Low Thia Khiang:

On the SG50 website, under its rules for the use of the SG50 logo, it says that it must not be used to:

“Advocate any political or religious agenda, or cause conflict or misunderstanding in society.”

Could it not be argued that by excluding the elected MPs of the WP in this distribution of SG50 goodies, which carries the SG50 logo and which are paid for by taxpayers, the SG50 committee is going against the spirit of its own rules?

Additionally, the GROs come under the aegis of the People’s Association (PA), which is a statutory board under the Ministry of Culture, Community and Youth (MCCY).

The ministry is headed by Mr Lawrence Wong, who is also the Chairman of the SG50 Programme Office.

Mr Wong, incidentally, has also been one of the ministers leading the charge against the WP town council, Aljunied-Hougang-Punggol East Town Council (AHPETC), over accounting issues.

The PA itself is part of the Public Service and it was reported that “the PA’s policy is that its grassroots groups have to remain non-partisan.”

The Online Citizen earlier reported on the political impartiality of the Public Service and the Civil Service: (see here):

In a speech published in the Civil Service magazine, Challenge, in 2005, the then Head of the Civil Service, Eddie Teo, addressed the question of political neutrality directly, and is worth quoting in full.

Do note that he was referring to the Public Service.

“In Singapore, where the same political party has been in power for 45 years, can and should the Public Service be “politically neutral”? After such a lengthy cohabitation, is the Singapore Public Service totally politicised and just an administrative arm of the People’s Action Party, as alleged by some critics?

“A former senior civil servant, J.Y.M Pillay, has argued that the Public Service should be impartial but not politically neutral because it must be pro-Government, in that it should serve the government in power. I think this argument is valid only if we make no distinction whatsoever between the government and the ruling political party and between national and party interest.

“Even though the longevity of the PAP has made the distinction blurred, so long as public officers believe that the public interest does not always coincide with the party interest, the term “political neutrality” continues to be a useful reminder of their proper role.”

If the SG50 committee truly believes that this jubilee year is “a momentous event for Singaporeans” and that SG50 is “a nationwide effort to celebrate our country’s 50th birthday” and that “our celebrations couldn’t [sic] be more meaningful if everyone got involved in a big way”, then should it not put politics aside and involve all elected members in its programmes and activities as well?

It would indeed be a shame if the SG50 committee, headed by Education Minister, Heng Swee Keat, could not bring itself to set aside partisan politics and instead of galvanising the people, creates further division.