Indignant reaction to video of 2 men smoking in MRT train 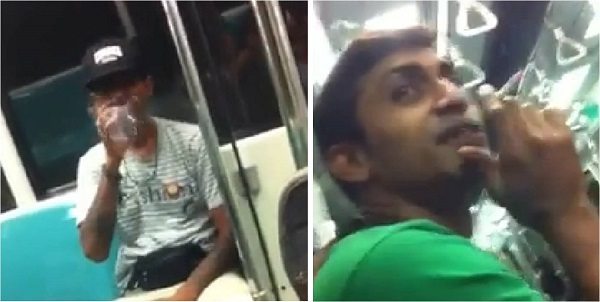 A video of two men smoking inside a MRT train has been uploaded online on the All Singapore Stuff (ASS) Facebook page. (See here.)

The one-minute video was sent to the ASS website on Monday night, the administrators of the site told The Online Citizen (TOC).

Smoking and eating in Singapore’s public transport system are prohibited.

The video begins with a man wearing a black cap taking a few draws on the cigarette, exhaling the smoke s he looks around the cabin car.

He then passes the cigarette to a second man who was seated across him.

As the train pulled into the Bukit Batok train station, as can be ascertained by the train’s announcement, the second man hands back the cigarette to the first man, who proceeds to continue to draw on the cigarette.

While a cursory online search will throw up videos of others smoking in trains, the peculiar thing about this particular one is that the person shooting the video appears to be a friend of the two “smoking” men, although it is unclear if he was also the one who had sent the video to ASS.

It is also unclear when the video was taken.

The video on the ASS page has drawn strong reactions, with many calling for the video to be sent to the police and the two culprits dealt with.

In recent years, the government has introduced stricter restrictions on smoking in Singapore, banning it in more areas such as corridors of HDB flats and entrances to buildings, and is looking to extend such bans further.

Here is the clip in question: