From SARs to Fernvale – reasons offered by MOH & MND

On Thursday, Mr Khaw Boon Wan said that the authorities had “assumed” that no for-profit companies would take part in temple tenders.

Eternal Pure Land Pte Ltd, the company which had won the bid for a plot of land in Fernvale to build a Chinese temple-cum-columbarium, is a private company owned by its Australian parent, Life Corporation.

Mr Khaw had said that Eternal Pure Land won the bid because “the officers assessing the tender just assumed that it must be a company affiliated to some religious organisation.”

In light of what the Mr Khaw said, we thought it would be good to revisit some of the reasons or explanations given by the Ministry of Health and the Ministry of National Development in the past, when Mr Khaw was in charge of the ministries, in the handling of some incidents which were in the spotlight.

We also highlight some of the controversial remarks and postings by Mr Khaw.

NO TIME, TACTICAL ERROR: “SARS Combat Unit Chief Khaw Boon Wan…admitted that the fresh batch of possible cases at the Institute of Mental Health had caught him unprepared. The chronic-care hospital ‘was not on my radar screen,” [he] confessed, ‘because we just didn’t have the time to focus on it. It was a tactical error.” (MFA) 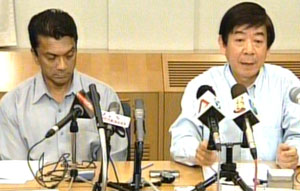 MISLED: “Were the regulators responsible for the NKF problem? Remember that the NKF was, and still is, a non-government organisation, a private company. Was there gross or wilful negligence on the part of the government officers who regulated the former NKF? Did they fail to take reasonable efforts to look into the former NKF under the prevailing regulatory framework?”

“[A] small group of people deliberately, through various means, misled, in a way, the entire society, including Mr Steve Chia and myself.” (KBW)

OVERSIGHT FAILURE: “However, in the case of a large entity like the NKF, because of its scale of fundraising, and the patronage that government leaders lent to the NKF, the government had a heavier responsibility to satisfy ourselves that the organization was properly run. We failed in not doing so earlier.” (KBW) 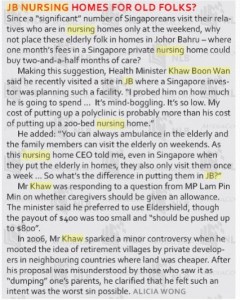 WORDS TWISTED: “I was merely making a comment, because I happened to visit a nursing home in Johor Baru and the cost there, to be expected, was very low, very much cheaper than Singapore’s. I suppose they saw advantage in putting words in my mouth or twisting my words.” (Accusing SDP of “twisting” his words.”) (KBW) HUMAN ERRORS: “The chemo overdose errors in KKH were human errors. They should not have happened, but they did. We are sorry for the mistakes and are all saddened by the incidents.” (KBW) NOT BUILDING EARLIER: “On hindsight, his ministry made a mistake …by not building the new [Khoo Teck Puat] hospital two years earlier.” (KBW) PROCEDURE LAPSES, HUMAN ERROR: “LAPSES in procedure and human error were the reasons behind the mix-up of sperm used in an in-vitro fertilisation treatment at Thomson Medical Centre.” (KBW) REASON : “SLA and HDB acknowledged that the letter could have been more carefully worded and the language updated to reflect the eventual development on Pulau Ubin. They had already apologised for the anxiety caused to the affected residents.” (Here.) “We have a few foreign workers’ dormitories. What if some quarrels erupt, leading to fights or worse? These are possible scenarios, given the concentration of foreign workers in one locality.” (KBW)
(Here.) HANDLED INSENSITIVELY: “We agree it should have been handled more sensitively, and the notice has since been taken down.” (URA/HDB)

2014: Sale of computer system to AIM, Khaw is chairman of PAP SALE IN “GOOD FAITH”: “The councils ‘acted in good faith in the interests of their residents’, and awarded the contract to AIM as the price was fair for software that was nearly obsolete, among other things.” (Here.) “What is interesting is that this AHPETC arrears incident also showed that everyone from HDB to MND, including Minister Khaw Boon Wan and Minister of State Desmond Lim are all sleeping on the job.” (TRE) “WE ASSUMED”: “And because temples or churches are non-profit- making, we just assumed that (for-profit) companies will not be taking part in a non-profit-making venture…” (Here.)