On Thursday, 29 January, 2015, the following letter was published in the Straits Times forum page:

All the town councils received the top “green” band for estate cleanliness in the latest report. But recent revelations of rat infestations in Bukit Batok, Punggol, and Clementi must surely cast some doubt on these ratings.

It would be reasonable to expect the ministry to accurately reflect these significant lapses in its current and future reports.

The Town Council Management Report (TCMR) was introduced in 2009 and is issued annually by the Ministry of National Development.

Recent incidents have raised questions about the accuracy and credibility of the TCMR.

The rats situations in the three housing estates which Dr Ng highlighted are rather quite serious.

In Bukit Batok on 16 December last year, hundreds of rats were spotted by a member of the public running around at an open field near the area’s MRT station. 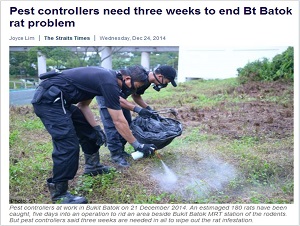 The situation was so serious that the pest controllers themselves said they needed three weeks to rein in the problem.

By Christmas, 25 December, more than 250 rats had been caught, and by the end of the extermination operation, the count rose to more than 300 rats.

Some criticised the MP of the area, David Ong, for allowing the infestation to take place.

Bukit Batok is under the purview of the Jurong GRC Town Council.

The authorities, however, laid the blame on members of the public for feeding the stray dogs in the area and leaving food in the open, which attracted the rats.

A similar situation was observed at Punggol Field on 16 January, where reporters who visited the site said there were at least 15 rat burrows. Residents also said “the sightings had become more common recently.” 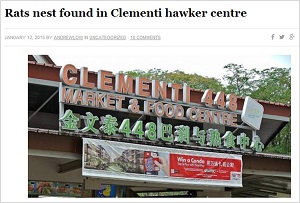 In both the Bukit Batok and Punggol Field incidents, they were described as “infestations”, which could mean that the rats had been there for some time.

And also in January, a nest of 10 baby rats “was discovered on top of an exhaust pipe located above a stall at a Clementi hawker centre”, the New Paper reported. And just about a week ago, a diner at the Court Market & Food Centre in Teck Ghee in Ang Mo Kio, reported that she had seen “four humongous rats running around” while she was eating there. (See here.)

One worker at the hawker centre told the media that “the rodent problem is not new.”

The Ang Mo Kio Town Council later issued a statement to say it was working with the National Environment Agency on the problem. 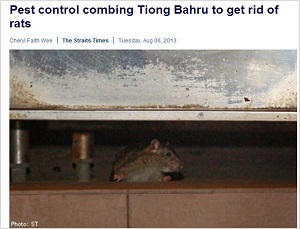 In July 2013, news reports highlighted the serious rat infestation situation in Tiong Bahru, where the NEA had found 42 rat burrows in the area alone.

The area is under the charge of the Tanjong Pagar Town Council (TPTC).

“Over the last six months, rodents have been seen scurrying in broad daylight, with some even running into ground floor units of homes and shops,” the Straits Times reported then.

One resident said the situation has “never been this bad.”

A week earlier, “it was reported that more than 10 rodent nests were found in the nearby Bukit Merah estate, which also comes under the TPTC.”

A year later in 2014, the situation seemed to have returned. (See here.)

The rat problem, however, is not limited to residential housing areas. 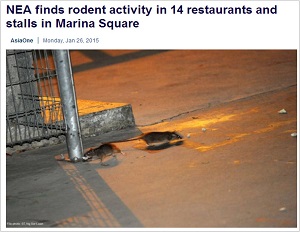 In Marina Square over the past month or so, the rat situation has hogged the limelight so much so that businesses there are reported to have been affected badly.

In January, a dead rat was found in one of the dishes served at the Hotpot Culture restaurant there. Since then, however, the NEA has discovered “rodent activity at 14 food establishments” at the mall.

Between the months of October and November, the NEA detected more than 10,000 rodent burrows, with 90 per cent of them found in housing estates.

These numbers led to experts raising concerns, with one saying the number of rat burrows is “alarming”. (See here.) It is indeed a disconcerting situation which could have far more devastating consequences, if the problem is allowed to persist.

In 2009, for example, two persons died and more than 150 fell ill after consuming contaminated food at a rojak stall at the Geylang Serai temporary hawker centre.

While the cause of the incident was attributed to the stall operator’s mishandling of food, during the clean-up of the hawker centre 122 rats were found there.

The NEA’s chief executive officer, Andrew Tan, said that “the problem of rat infestation persisted despite efforts put in by the Temporary Market Management Committee in implementing its cleaning regime.”

While one would not want to unnecessarily press the panic button, one would however ask how, with all these rats being observed over the years in housing estates – which is an obvious sign of poor public hygiene management – various town councils could still be given “green” ratings for “Estate Cleanliness” in the TCMR reports.

“Green” is the best rating, followed by “Amber”, while “Red” signifies significant shortcomings.

Tanjong Pagar Town Council, for example, received “green” ratings in both FY2012 and FY2013 despite the rat problems in Bukit Merah and Tiong Bahru in 2013.

With the disconcerting number of such incidents happening around Singapore and mainly in housing estates, it is important that the TCMR accurately reflect the situation on the ground. Rat infestation is a serious public health issue – and residents and members of the public need to be adequately informed.

The TCMR is supposed to “facilitate greater public accountability and transparency [of the town councils], better reflect public concern, and encourage community ownership.”

One would hope that the next TCMR report will reflect this accurately.