By Gangasudhan
Singapore Press Holdings (SPH) held its Annual General Meeting (AGM) on Tuesday at the SPH News Centre, where its chairman, Dr Lee Boon Yang, gave an outline of the group’s performance to the shareholders.
Contrasting against “rather unsettled economic conditions globally”, he described the net profit of $404.3 million earned as “creditable” although this was 6.2% less than its performance in FY2013. He also noted that, “Higher contributions from property, magazines, exhibitions, radio and online classifieds helped to cushion the drop in our Newspaper contribution.”
While he said that circulation of all newspapers under the SPH banner grew by 1.7% to 1.07 million copies, with The Straits Times in particular registering a 2.2% growth to reach a circulation of 459,300 copies island-wide (inclusive of more than 100,000 in digital subscriptions), the profitably of its newspaper and magazine business declined by a significant 16% (or $47 million) as compared to FY2013, attributed in particular to the drop in advertisement revenue by 6.8% (or S$51.3 million) and circulation revenue by 4.9% (or S$9.7 million). 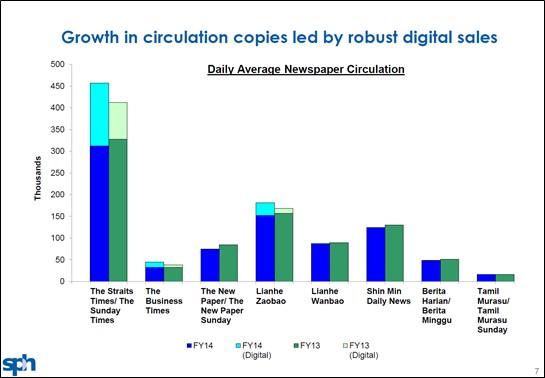 In terms of staffing, it was revealed at the AGM that at least 135 positions were trimmed, representing 3.1% of the SPH workforce of over 4,000. However, this did not translate into cost savings and the manpower cost rose by 7.1% from $349,643 in FY2013 to $374,519 in FY2014, “mainly due to salary increments, higher bonus costs including a one-off special bonus for prior year (S$10.4m) arising from REIT profit and incentive to drive growth.” 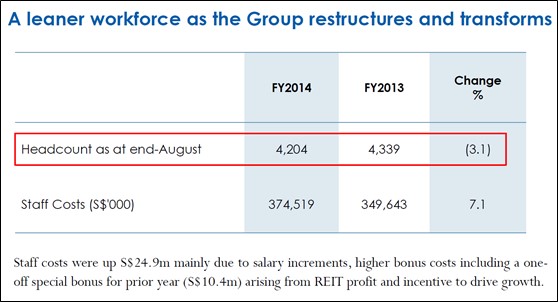 SPH’s growth appears to be fuelled by all its non-newspaper businesses, particularly its property investments which registered a 7.6% increase from FY2013’s earnings. The group owns The Seletar Mall, Paragon and The Clementi Mall, and Dr Lee said he was “pleased that the REIT unit price has performed well, reflecting the good performance of the business” with rental reversions of 8.5% a contributing factor.
SPH also has an investible fund amounting to $1.9 billion – broken into Equities (28.4%), Investment Funds (37.4%), Cash & Deposits (14.6%) and Bonds (19.6%) – which registered a 4.5% growth from the preceding year.
Moving forward in its primary business, the chairman revealed that a $100-million-dollar fund has been set up (i.e. New Media Fund) as a dedicated investment vehicle for securing media-related businesses. In addition, SPH is entering the education sector by securing a 22% stake in Mindchamps Holdings for $12 million.
Finally, there was some movement in the board of directors, with Professor Cham Tao Soon (founding chancellor and chairman of SIM University) and Mr Sum Soon Lim (Corporate Advisor of Temasek Holdings (Private) Limited) stepping down to be replaced by Mr Tan Chin Hwee (founding partner in Asia for Apollo Global Management) and Ms Janet Ang (Managing Director of IBM Singapore).
While the newcomers were voted in at 99% of the shareholder votes, and Ms Chong Siak Ching (President and Chief Executive Officer of Ascendas Pte Ltd) was reelected at 98%, one director, Mr Lucien Wong Yuen Kuai (Chairman and Senior Partner of Allen & Gledhill LLP), received a lower 92% of the shareholder votes.
The presentation slides, the chairman’s speech and resolutions adopted at the AGM are available online at the SPH website.