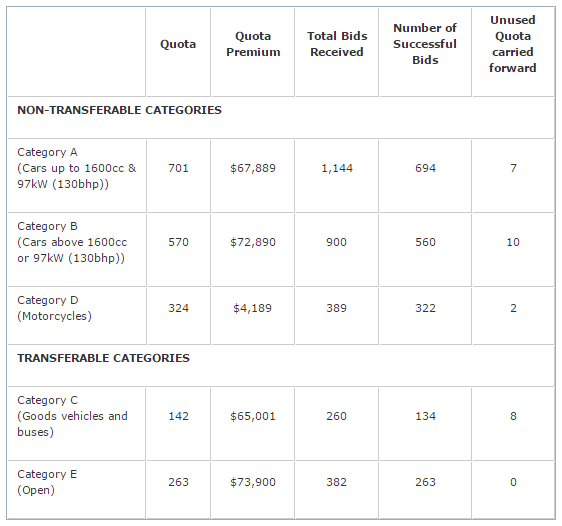 The Land Transport Authority (LTA) received 3,075 bids at the end of the November second open bidding exercise for Certificates of Entitlement (COEs) on 19 November 2014.  Of these, 1,973 were successful.
COE for cars above 1,600 cc or 130 bhp rose slightly to $72,890, up from $70,890 previously.
Open COE, which can be used for any vehicle type but ends up mainly for bigger cars, also increased. It closed at $73,900, up from $71,300.
Commercial vehicle COE rose from $63,701 to close at $65,001, while motorcycle premiums ended at $4,189, down from $4,290.
Prices for Category C has increased yet again, to $65,001 which is 89% of the price for Category B vehicles. There is also a mere $2,800 difference between the COE prices of Category C and Category A vehicles.
A big yo-yo in Category C price is observed as the market is being jittery because of the cut in quota.
The Category C price was $32,980 in April. Now the price has doubled, just 7 months later.
What is seen here is a great example of the yo-yo effect which Han Fook Kwang described in his article on Singapolitics:

No policy should result in such arbitrary price movements that bear no relation to the economy. It is also terribly unfair for one person to pay more than six times what somebody else paid two years ago.
And it’s no good saying it’s the free market working because the COE market isn’t free. It’s created by government and determined completely by policy.

For just US$7.50 a month, sign up as a subscriber on The Online Citizen Asia (and enjoy ads-free experience on our site) to support our mission to transform TOC into an alternative mainstream press.
Tags: COE

Yet another high record set for COE of motorcycles

Round-up of Certificate of Entitlement in 2014