Local human rights Non-government Orginsation (NGO) MARUAH in its’ 3rd position paper of their ongoing project, “Defending the Legitimacy of Singapore Elections” calls for an independent Electoral Boundary Review Committee (EBRC) to be formed and more transparency on how electoral boundaries are drawn and for polling data at the precinct level.
Mr Ngiam Shih Tung, a MURUAH member in his presentation said that the Singapore’s electoral boundary delimitation process has been characterized by a lack of transparency with no public representation on the Electoral Boundary Review Committee (EBRC) and no substantive explanations provided for the decisions of the Committee on how the boundaries are redrawn prior to the General Elections.
Mr Ngiam pointed out that ERBC were much open in how electoral boundaries were redrawn in the past as compared to the current process. In 1954, where the total electors were 300,000 and 25 to-be-elected Members of Parliament (MPs), the ERBC came up with a report of 4,500 words explaining why and how the boundaries were drawn up. However in drawing up the electoral boundaries for the 2011 General Elections which involved 2.3 million electors and 87 to-be-elected MPs, the ERBC report only contained 1,500 words. The report itself was brief and did not go into details of the redrawing of boundaries.
He added that although the EBRC consists mainly of civil servants but the committee should also include individuals, such as laypersons and technical experts from the private sector.
“The decision-making process must be independent and impartial, and appear to be so,” said Mr Ngiam. Using an overlapping map with the constituency boundaries with the Urban Redevelopment Authority (URA)’s planning area. Mr Ngiam pointed out that the boundaries often appear to be arbitrary with no community of shared interest within a constituency, and more natural communities split between different constituencies which run without consideration of where the URA planning lines are drawn. Boundary changes are also made more frequently than appear to be required based on movements in population.
The NGO noted that it is impossible for impartial observers to objectively assess whether the redrawing of constituency boundaries is likely to favour one party or another without polling data at the precinct level to be made available.
Changes to the electoral boundaries such as the transfer of certain districts in Hougang from Aljunied GRC to Ang Mo Kio GRC, and the transfer of districts in Kaki Bukit from Marine Parade to Aljunied GRC will foster cynicism in the electorate as accusations of gerrymandering cannot be proven nor disproved.
The NGO also noted that the Constituency populations or ratio of representatives to voter) should be as equal as possible to ensure that all votes carry the same weight.
Pointing to the instance of Potong Pasir SMC, the number of voters in has been more than 30% below the national average since 2001 while In 2011, the number of voters was 35% below the national average. 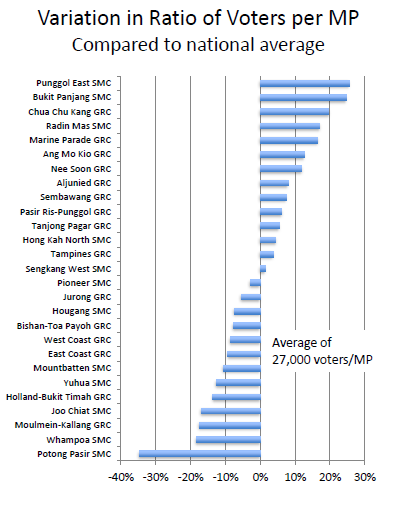 The “norm” of up to 30% variation implies that voters in one constituency could have up to 86% more voting power than voters in another constituency. The NGO argues that it is unlikely that variations as large as 30% are required, especially since Singapore has the additional lever of being able to vary the number of members in GRCs to achieve greater equity in voter/MP ratios.
The NGO highlighted that the community spirit and identity are weakened and residents are unable to form strong relationships with their elected representatives due to such arbitrary changes.
Readers might be interested in what the ERBC wrote in their report of the 1954’s redrawing of the electoral boundaries.

“We tried to look at our proposed divisions through the eyes of the elector and the candidate. The elector should see clearly why he is in one division rather than in another; lines of demarcation, therefore, must be easy to follow. The area should not be bigger than the elector would travel normally and with ease. He must see that he has a common interest with his fellow electors.”
“From the point of view of the candidate, the division must not be too large in number or diverse in interest for him to canvass his electors, or care for his constituents, once elected. He is concerned with the roads and with centres where he can hold meetings. It would also be his wish to represent a division where the community of interest and its distinctness from the interests of others is clear.”