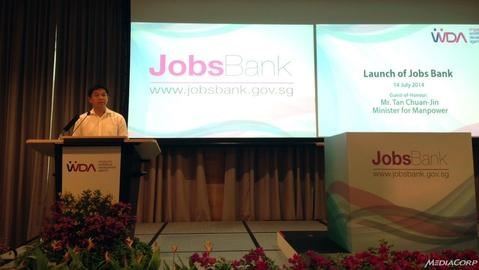 On 8th September 2013, Mr Gerald Giam Yean Song, Non-Constituency Member of Parliament asked the Ministry of Manpower in Parliament, questions on the Jobs Bank which came into force on 1st August 2014, aimed at making firms consider Singaporeans fairly for a job.
Under the system, employers will have to advertise job vacancies in the Jobs Bank for at least 14 days before they apply to hire an Employment Pass (EP) holder. The new rule is applicable to jobs paying at least $3,300 and up to S$12,000 a month.
Firms that do not comply will not have their application for an EP approved.
Mr Giam asked if the Ministry tracks the proportion of the posts in Jobs Bank which are eventually secured by Singaporeans. And if there is no such tracking system, does the ministry have plans to measure and publish such data by requiring employers to disclose the outcome of their job postings. He further questioned if such data could be cross referenced with data from Employment Pass and S-Pass application processes to yield patterns and causes for PMET jobs not going to Singaporeans.
Mr Tan Chuan-Jin, Minister for Manpower said that more than 31,000 Singaporeans have signed up with the Jobs Bank with over 65,000 jobs available and the feedback from the Job Bank has also been positive.  He went on to mention that Jobs Bank is not meant to gurantee locals are given a job and was intended to facilitate a fair hiring process and greater awareness of job vacanies avaliable for job seekers.
However, the minister with his explanation of what Jobs Bank was meant for, stopped at giving any statistics of the success rate of employment by Singaporeans in the jobs available at the Jobs Bank.
This may imply that the Ministry of Manpower does not keep track of how many Singaporeans are being offered employment in the jobs avaliable in the Jobs Bank and thus raising a question about if the ministry can identify whether employers are going through the motion of listing the vacancies in the database so that they could proceed with hiring of foreign workers after the period of listing is over.

Full text of the reply by Mr Tan Chuan-Jin, Minister for Manpower to Mr Giam’s questions.
To date, more than 31,000 Singaporeans have signed up with the Jobs Bank and more than 10,000 employers have come on board and are actively posting job vacancies. There are over 65,000 jobs available on the Jobs Bank today. The feedback from both employers and job seekers has also been positive. It is an encouraging start, and we hope more employers and Singaporean job seekers would use it over time.
The Jobs Bank was intended to facilitate a fair hiring process and greater awareness of job vacancies available for Singaporean job seekers. Singaporean job seekers are now able to make job applications directly through the Jobs Bank for a comprehensive list of job openings.
The Jobs Bank and the Fair Consideration Framework (FCF) was not, however, set up to guarantee local job seekers that they will always get the job. This will continue to be determined on the basis of merit, and to the best applicant for the job. There can be various reasons why an employer may not end up hiring the Singaporean candidate after considering applications fairly.
For example, in the IT sector, there could be jobs that require technical skills or domain knowledge of legacy programming languages, which IT firms use in supporting legacy IT systems of many companies that our local workforce may not possess in sufficient numbers. Likewise, Singaporean job seekers have their reasons for not accepting job offers, for example, if employers are unable to meet their expectations in terms of job scope and other personal considerations.
Singaporeans may also get placed in jobs through means other than the Jobs Bank. For example, Singaporeans may be hired directly by the firm or through head-hunters or private job portals and other job advertisements. Even when Singaporeans apply for a job that they see on the Jobs Bank, we cannot directly track this. For example, job seekers may apply through firms’ in-house HR portals. Therefore, data on the number of Singaporeans who were placed in a job vacancy which was advertised on the Jobs Bank would not be a representative or accurate indicator of how well Singaporeans are doing in the labour market in general.
Rather, what is important to us is whether the overall labour market ecosystem benefits Singaporean job seekers. This goes beyond the Jobs Bank and involves broader factors, such as the number and types of jobs being created, and whether our people have the skills and passion for the job. We track and report indicators of citizen employment outcomes regularly, and the situation is healthy. The seasonally adjusted citizen unemployment rate is 3.0% [1] and remains much lower than those of many other countries, while Singaporean workers have enjoyed positive real wage growth over the last five years [2].
We are, at the same time, keeping a close watch on firms’ hiring patterns. If a firm has a disproportionately low percentage of PMEs who are Singaporeans compared to their industry peers, we will initiate closer scrutiny of the firm to find out more details about the hiring practices and plans to develop Singaporeans for more senior positions. MOM will assess if HR practices are fair in these firms. If they are not, we will ask the firm to work out a plan to make improvements. Should a firm remain uncooperative, or not adhere to the plan, it may have its work pass privileges curtailed.
———-
[1] Preliminary estimate in June 2014.
[2] The real median gross monthly income from work (including employer CPF contributions) of full-time employed Singapore Citizens grew by 1.7% per annum from 2008 to 2013.