Chen Jilong, a premium casino player at Marina Bay Sands (MBS), is being sued by the casino for debts totalling some S$1.88m.  (Bloomberg)
Mr Chen had been given a S$3m credit in November 2011, but is now being probed for unpaid gambling debts which he has refused to pay, according to court papers filed by MBS.
Chen Jilong is the brother of Chen Jihong, a metal trader who is being investigated and detained in China for alleged loan fraud. (Read the Wall Street Journal’s report here.)
Both brothers are directors of Singapore-based metal trader Zhong Jun Resources.
The company is being sued by HSBC Holdings for failing to repay a bank loan.
“Mr Chen [Jihong], now 48 years old, rode a wave of high commodity prices, creating an empire that propelled him onto the board of a prominent state-owned miner,” the WSJ says.
“Bankers are looking into whether entities linked to a company Mr Chen owns, Decheng Mining Ltd., based in the eastern port city of Qingdao, illegally pledged the same stocks of commodities multiple times as collateral to get loans from foreign and Chinese banks, according to executives at Western banks who made some of the loans.”
Mr Chen is also being sued by Standard Chartered Plc (STAN) in Hong Kong for $35.6 million the bank says it’s owed under a loan agreement.
He is alleged to have pledged the same metals stockpile three times over to obtain more than 2.7 billion yuan ($435 million) of loans, according to preliminary findings of an official investigation.
According to Bloomberg, “Standard Chartered Plc said on Aug. 6 it has made provisions of $175 million related to the potential fraud, while Chinese banks have about 20 billion yuan ($3.3 billion) of exposure, two government officials said July 16, citing findings of an official probe.”
The investigation into Mr Chen’s business dealings “has cast a chill in Singapore, where a surge of business financing imports into China has bankers increasingly worried”, the Financial Times (FT) reported in June.
“More and more of these loans originate from Singapore as international banks move their China business out of Hong Kong, leading Chinese firms to set up shop in the tropical entrepot to tap offshore dollar liquidity,” the FT said.
It added:
“The investigation has raised alarms over import financing of iron ore, also increasingly conducted out of Singapore. 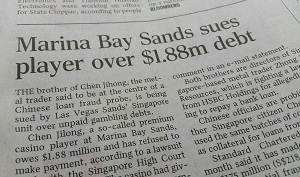 “Corporate filings for Dezheng Resources’ trading subsidiary – which operated in Singapore and Hong Kong under the name Zhong Jun Resources – record obligations to at least nine international banks. It is unclear how many of those obligations have been discharged already.”
Both brothers hail from China.
Chen Jilong is a Singapore permanent resident, while his brother Chen Jihong is a naturalised Singapore citizen.
Singapore’s Ministry of Foreign Affairs said it was giving consular assistance to Mr Chen Jihong’s family.