She owed the Tanjong Pagar Town Council $411 in conservancy fees – and was issued a summons to appear in court.
According to My Paper, Mdm Lee – who is 75-years old – received the summons two weeks ago.
However, Mdm Lee said that she seldom opens her letterbox, and had had to ask a friend to read the letter to her as she can’t read English.
The newspaper said Mdm Lee, who lives in Lengkok Bahru, surrendered herself to the police this month and was detained for two days after she declined to post bail which was offered to her.
Two days later, according to My Paper, Mdm Lee posted the bail and was released.
“My husband died in 2008, and I stopped working in 2003,” Mdm Lee told Chinese newspaper, Shin Min. “I pay only when I have money to spare.” 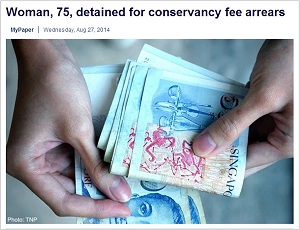 Mdm Lee said that “her husband had been ill before he died and she had been delaying the $55 monthly payments since then.”
Service and conservancy fees are the main source of funds for town councils.
In November last year, the coordinating chairman of the 14 People’s Action Party (PAP) town councils, Teo Ho Pin, said that because of the cost of maintenance, “at some point in time we will need to revise the S&C charges.” (See here.)
In 2008, the then-first organising secretary of the PAP, Khaw Boon Wan, revealed that the 14 PAP town councils had a total of S$2 billion in their sinking funds – a revelation which surprised many.
If found guilty of failing to pay her conservancy charges, Mdm Lee can be fined $1,000.

Bottom 20% of households “got more” in GST vouchers than the amount of GST payable: Minister Lawrence Wong