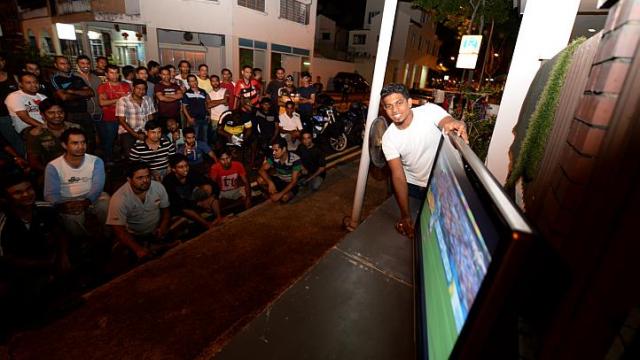 The police has put a stop to the public screening of World Cup matches by a resident in Sing Avenue, near the Little India area.
Since the start of the global football competition, the World Cup, resident Rooban Kanth had been placing a television outside his terrace house in the evening, when the matches were on.
Soon, a small crowd started to gather, and increasing to as big as 70 people.
On Thursday, apparently the police stepped in and advised the crowd to disperse.
“We cooperated and brought the television back into the house,” Mr Rooban told the media. “The police were very nice about it.”
The incident has angered some members of the public who vented their frustrations online, over the police action.
“For goodness sake they’re just watching football and creating a camaraderie!!” Suhairi Sulaiman said.
“Rather sad to see this,” Mark Koh said. “I’m presently in Germany and the government here sponsors public screenings in all major cities where everyone can watch the cup together – it actually has a very positive impact on local businesses too and a great morale raiser.”
Luis Tan said, “I don’t see anything wrong with the nice guy sharing the World Cup screening to the workers there… why is there a need to shut it down if they don’t cause any nuisance to the residents there? shows that Singaporean got more heart than the one that lord over it.”
The football matches are being screened at all the community clubs around Singapore.
Do you think the police should have disallowed the screening at Sing Avenue?
Vote and voice your opinion here: “Police should not stop football screening by resident“.