In what is seen as a harder stance on the issue of homosexuality, the Catholic Church in Singapore has pronounced the Lesbian, Gay, Bi-sexual, and Transgender (LGBT) “lifestyle” as being “detrimental to society”.
The Church said such a lifestyle “is not helpful to integral human development and contrary to Christian values.” 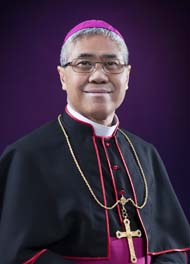 These views were set out by the head of the Catholic Church here in Singapore, Archbishop William Goh, in a pastoral letter to Catholics on 21 June. (See here for full letter.)
The Church’s latest pronouncements follow its earlier letter in March in response to the Ministry of Health’s FAQ on Sexuality which had stirred controversy then. (See here letter for full letter.)
In its letter then, the Church seemed to have struck a more accepting tone.
“My Consultors and I have chosen to take the path of constructive dialogue with the authorities, so as not to inflame the situation further and risk polarizing society,” Archbishop Goh said then. “As in all politically and socially sensitive issues, we believe that the best way forward is for all to calmly and purposefully engage in constructive dialogue in a spirit of patient understanding, mutual respect and compassion, always working towards the promotion of justice and dignity of the individual and for the greater good of society.”
Apparently referring to homosexuals, Archbishop Goh’s letter said he was aware that “some of our faithful are confused and are struggling to come to terms with their own sexuality, or that of their loved ones.”
“I wish to take this opportunity to assure you that the Church feels with you and views every individual as unique and precious in the eyes of God, regardless of his/her sexual inclination or state of life,” he said.
However, the Archbishop emphasised that the Church’s position was that “sexual activity outside of a heterosexual relationship is not in accordance with the laws of creation because such acts are not open to new life.”
Nonetheless, he said then that the Church was “exploring the setting up of support groups to assist those who are struggling with same sex attraction and their loved ones who have difficulty accepting them.”
In its pastoral letter on Saturday, the Archbishop took a more hardline stance on the issue, and began his letter with the statement, “The LGBT movement is gaining momentum.”
Referring to homosexuality, he said that “regardless of their sexual orientation, the Church has always looked on each individual as being a child of God, made in His image and likeness and is therefore worthy of love and respect.”
However, in referring to homosexuality, the Archbishop said “this kind of lifestyle should not be promoted by Catholics as it is detrimental to society, is not helpful to integral human development and contrary to Christian values.”
He said that “whilst the Church urges compassion, acceptance, patient understanding and mutual respect for these individuals, she believes that there are ways to ensure justice and the protection of their dignity without the risk of endangering the future of the marriage institution, family and society.”
The Church, he said, is of the view that “discrimination of any kind” is “neither pleasing in the eyes of God, nor that of man.”
He explained that “although the Church treats each individual, regardless of his/her sexual orientation, with sensitivity and respect for his/her dignity, she upholds the view that LGBT sexual relationships are not in accordance with the plan of God.”
This “plan of God” was that God “had intended for them [human beings] to ‘be fruitful, multiply, fill the earth and subdue it’”, Archbishop Goh said, quoting from the Bible.
This was the same point he made in March, when he said the Church was against the LGBT “lifestyle” because “such acts are not open to new life.”
The Catholic Church’s statement comes after the developments this past week where a Wear White campaign was launched to urge Muslims to don white attire on 28 June to protest homosexuality, as well as the Pink Dot event at Hong Lim Park which will take place on the same day this year.
28 June is also the first day of the Muslim holy month of fasting, known as Ramadan.
The campaign prompted the Islamic authority here, the Islamic Religious Council of Singapore (MUIS), to call on believers not to adopt a “confrontational approach” towards the gay community.
“We do not agree (or) approve (of) the pervasiveness of the LGBT lifestyle and we cannot agree to the efforts in promoting such a lifestyle,” Muis said in a statement on 21 June.
“Nevertheless, we have to plan for something which will not only strengthen the resilience of our community to the LGBT lifestyle, but also help those who have been leading this lifestyle abstain from it and, at the same time, help those who have inclinations towards this lifestyle overcome those inclinations by providing support to them.”

The Wear White campaign also found support from the Christian Faith Community Baptist Church (FCBC) which is headed by senior pastor, Lawrence Khong. [Picture, right] Mr Khong said his church and the LoveSingapore network of churches will be encouraging their members to wear white next weekend as “a show of support” for the campaign.
“I’m so happy Singapore’s Muslim community is making a vocal and visual stand for morality and family,” he said.
Also on Saturday, Deputy Prime Minister Tharman Shanmugaratnam said that “matters that have to do with religion and personal preference have to be handled with balance and restraint.”

“All these matters, we just have to exercise a sense of balance and restraint, especially when it comes to matters that have to do with religion and personal preferences,” Mr Tharman told the media.
“We just have to be a society where you don’t go pushing your own beliefs and preferences, but at the same time everyone keeps the balance in society and avoids creating conflict.
“So it’s something that requires active management on everyone’s part.”