Loss of public trust – why the denial?

By Andrew Loh
Author Catherine Lim, even after 20 years, is still able to ruffle a few feathers up there in the tower.
The responses from the Singapore consul general in Hong Kong and Member of Parliament, Janil Puthucheary, to author Ms Lim’s latest analysis of the level of trust between the Singapore government and the people is a demonstration of the proverbial head in the sand syndrome.
Both the consul general, Jacky Foo, and Dr Puthucheary, the MP for Pasir Ris-Punggol GRC, deny Ms Lim’s contention – namely that the People’s Action Party (PAP) Government is facing an “unprecedented crisis of trust” from its citizens.
The government initially ignored Ms Lim’s opinion which she published on her website as an open letter to Prime Minister Lee Hsien Loong.
She said that it was because of Mr Lee’s “inability or unwillingness to listen to the people” which had brought about such a crisis.
The consul general only responded after the Hong Kong-based newspaper, the South China Morning Post, reported Ms Lim’s open letter.
The responses from Mr Foo and Dr Puthucheary followed shortly after, and they are instructive for two things:

Let’s take a look at the second issue first.
In what could only be seen as arrogant and dismissive language, Mr Foo boasted of several achievements of the PAP government – including having won four general elections “by healthy margins” since 1994 when Ms Lim first raised the issue of a divide between the government and Singaporeans. Despite these, he said, Ms Lim “continues to regularly bemoan a collapse of trust and respect for the government.”
Dr Puthucheary’s use of the language in this instance is more cutting – describing Ms Lim as someone who “cannot be trusted to be consistent in her own statements.”
He then dismissed Ms Lim’s views as “sweeping attacks” on the government and Ms Lim as a “jaundiced [commentator] on the sidelines.”
The tone of the language which the two gentlemen used is curious.
Why the need to adopt such dismissive stance towards someone who, as far as anyone can tell, was sincere in sharing her views, and doing so by taking time to pen a lengthy open letter to the prime minister?
Did not the prime minister himself, just a month before the elections in 2011, advise his Members of Parliament “never forget that we are servants of the people”? “Always maintain a sense of humility and service,” Mr Lee said. “Never lord it over the people we are looking after and serving.”
So, why the rather personal admonitions of Ms Lim?
Be that as it may, what is even more puzzling is the complete denial of a “crisis of trust” between the government and the people by Mr Foo and Dr Puthucheary. 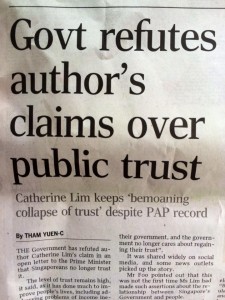 Mr Foo cited an international study, namely by US-based public relations firm, Edelman Trust Barometer, to back up his claim that “trust in [the] government in Singapore remains high.”
Mr Foo, however, did not mention that the same Edelman study in 2012 put the level of trust in individual Singapore leaders at a measly 23 per cent.
Dr Puthucheary, on the other hand, relied on his interactions with his residents, and the PAP government’s track records, to rebut Ms Lim’s claims.
I think both Mr Foo and Dr Puthucheary have missed the elephant in the room – an elephant which is large enough for several other commentators to notice.
This is the demonstrable fact that the erosion of trust in the ruling party is real.
The most obvious of this is the declining share of the popular votes of the PAP since Mr Lee took over as secretary general of the party.
It has fallen by 15 per cent, a substantial amount, from the high of 75 per cent in 2001 to the 60 per cent in 2011.
This is made even more evident when the PAP also lost two consecutive by-elections – in 2012 and in 2013 – by significant margins.
If that does not convince those like Mr Foo and Dr Puthucheary, then perhaps the views of other commentators will. These include those from the very same PAP government and its MPs.
In the month of February in 2013, two prominent personalities – MP Inderjit Singh and academic and former NMP Simon Tay – both spoke of the need for the government to rebuild or regain trust. 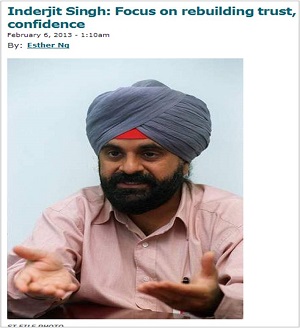 “As a government, we need to rebuild the trust and confidence among Singaporeans that our citizens matter most to us,” Mr Singh said in Parliament during the debate on the Population White Paper.
Mr Tay, writing about the reaction to the PWP, said “trust needs to be rebuilt” following the howls of protest, including the largest gathering post-Independence at Hong Lim Park over the matter.
Even the Straits Times former editor, Han Fook Kwang, jumped into the debate.
“Government needs to regain people’s trust”, his article in the paper said, in February 2013.
Mr Han said the “biggest problem” in the Government selling the PWP to the people was “a lack of public confidence in the Government.”
“This is evident in the quick way many dismissed the White Paper even before reading its contents,” he wrote.
“Tackling this erosion of confidence and trust must be a top priority of the Government or it will face even more problems from a sceptical public.”

In a paper on the year-long Our Singapore National Conversation which took place in 2013, the Lee Kuan Yew School of Public Policy asked how the Government could “rebuild trust with Singaporeans”, following the momentous general election of 2011.
Later the same year, in September, the government newspaper, the Straits Times, had a full page article by David Chan, director of the Behavioural Sciences Institute, Lee Kuan Yew Fellow and Professor of Psychology at the Singapore Management University, delving into the question of trust in the government.
And more recently, in March 2014, it was Deputy Prime Minister, Tharman Shanmugaratnam, who spoke on the issue. 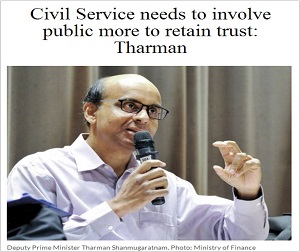 Significantly, Mr Tharman’s remarks on the issue of trust was made at the Administrative Service Dinner and Promotion Ceremony.
Describing it as a “broader challenge”, Mr Tharman said the bigger challenge for the Government was “retaining public trust in Government in a new and more challenging social and economic environment.”
“Trust in governments has fallen in many countries in recent years, possibly because of declining economic well-being, a growing sense of polarisation in society, and the lack of effective government responses,” Mr Tharman said.
He too referred to the Edelman Trust Barometer, saying that the study showed that “public trust in most governments, and in government leaders, has fallen.”
“In more than half of the countries surveyed last year, the majority of their populations no longer trust governments to do what is right,” the DPM said.
However, he added, “Fortunately, trust in government as an institution, as well as trust in government leaders, has remained significantly higher in Singapore in recent years than for the global average in this survey.”
And in remarks which are more reasonable and rational than the seemingly blind adulation with which Mr Foo accorded the Edelman study, Mr Tharman cautioned that “we cannot read too much into perception surveys, or take too much comfort from them.”
“But the broad conclusions are clear enough,” he said. “We operate today from a position of broad public confidence in the Government, and equally, we have to work hard to keep this trust in Government that has been built up over the years. Nothing is permanent, and the ease with which trust has slipped in many countries is a warning.”
Mr Tharman further cautioned that “if we end up with the deep scepticism about government seen in many other countries, it will reduce our space for manoeuvre, both in making difficult domestic policy decisions in Singaporeans’ long term interests and in managing our external relations.”
He called on “the civil service, working with political leaders” to “do all we can to preserve and build on public trust in Government.”
So, in conclusion, it is unwise to dismiss, like Mr Foo and Dr Puthucheary did, those who caution or who raise concerns about the level of public trust in the government.
Indeed, Mr Tharman, and the many others mentioned above, including Ms Lim, are wise in keeping a spotlight on the issue and issuing reminders of the importance of trust between the government and the people.
It is those who frivolously dismiss such caution who are in fact jaundiced in their views, and would do Singapore no good by opposing for the sake of opposing.